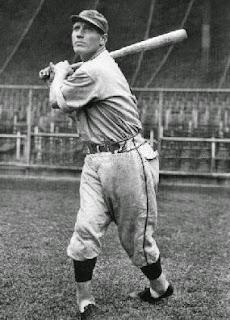 ~Chuck Klein 1904–1958 (Cubs 1934-1935)
Chuck Klein had two great nicknames: “The Hoosier Hammer” and “The Clouting Kraut.” The Hoosier part of his nickname came from his Indiana roots, and the Kraut part, of course, came from his German heritage. Needless to say, the hammer and clouting parts of those nicknames were inspired by his propensity to hit home runs. The Cubs got the big slugger just after he won the Triple Crown, the first time anyone had ever traded a Triple Crown winner. The Phillies obviously recognized that his stats were padded by playing in a ballpark with a ridiculously short right field porch. Once he joined the Cubs, he suffered a series of injuries. He drove in only 80 and 73 runs in his years spent with the Cubbies. On the other hand, Klein did help Chicago to a World Series in 1935, and hit .333 in that Series (the Cubs lost in six games to the Tigers). After he was traded back to the Phillies, he hit four home runs in his first game back. Ah, there’s nothing like a short right field porch. Chuck Klein was inducted into baseball’s Hall of Fame in 1980, 22 years after his death.

~Larry Himes 1940– (Cubs GM 1992-1994)
Yes, he traded for Sammy Sosa, but Larry Himes will always be remembered for letting Hall of Famer Greg Maddux go for no good reason. When he signed Jose Guzman, he said it would make up for the loss of the best pitcher of his generation. Um…not so much. Himes was also known for his prickly and harsh personality. He instituted nitpicky rules like dress codes for players and no beer allowed in the clubhouse, which needless to say, didn’t win him any friends on the team. Cubs players, managers, and fans couldn’t stand him, and when he left, everyone cheered. In his years with the Cubs, they finished 4th, 4th, and 5th.

~Morrie Steevens 1940– (Cubs 1962)
The lefty reliever made the Cubs out of spring training in 1962, and debuted against his favorite childhood team the Cardinals in April. Steevens gave up a two-run double to Bill White. He was only 21 years old at the time. He pitched a few more times before the Cubs sent him down to the minors. They didn’t bring him back up until September. All told, the rookie appeared in twelve games and had a respectable ERA of 2.40. That was it for his Cubs career. He later also pitched for the Phillies.

~Sammy Drake 1934–2010 (Cubs 1960-1961)
Drake was a speedster who used mainly as a pinch runner by the Cubs in parts of two seasons. Unfortunately for Drake, he wasn’t much of a hitter. He only got one hit as a Cub. Sammy’s time with the Cubs came just a few years after his big brother Solly wore a Cubs uniform.

~Grady Hatton 1922–2013 (Cubs 1960)
Hatton was an All-Star second baseman, and a rare breed for his era — an infielder with power. Naturally all of that occurred before he came to the Cubs. He was 37 years old when he joined Chicago for the last 28 at-bats of his career. He also played for the Reds, Red Sox, White Sox, Cardinals, and Orioles.

~Red Adams 1921–2017 (Cubs 1946)
Adams starred for the Cubs minor league affiliate in Los Angeles while the Cubs were winning the pennant in Chicago in 1945. He won 21 games that year. The Cubs brought him up in 1946, and he ran into a buzz saw. In eight appearances Adams posted an ERA over 8. He had to settle for starring in the minor leagues after that. Adams never returned to the show. After his playing days he worked for the Dodgers as a scout and coach.

~Charlie Fox 1921–2004 (Cubs manager 1983)
Fox never played for the Cubs (he was a Giant), but he did get the call from general manager Dallas Green to manage the Cubs at the tail end of the 1983 season after Lee “it’s a playground for the c*********” Elia was fired. The Cubs went 17-22 under his tutelage on their way to a 5th place finish. The following season Jim Frey was at the helm, and the Cubs came ever so close to winning the NL pennant.

~Frank Baumholtz 1918–1997 (Cubs 1949, 1951-1955)
Frank was the starting center fielder with the Cubs, and he had his work cut out for him during most of those years. Left fielder Ralph Kiner combined with the equally slow Hank Sauer in right, so the Cubs outfield might have been the worst fielding outfield the Cubs ever had. Kiner joked that both he and Sauer used to scream “You got it, Frankie” every time the ball was hit in the air. Frankie was also a pretty good hitter. In 1952 his .325 average was second in the league.

~Fred Fussell 1895–1966 (Cubs 1922-1923)
Fussell may not have been a great big leaguer with the Cubs (4-6 with an ERA over five), but he had one of the all-time great nicknames. His teammates called him “Moonlight Ace” because he once threw a no-hitter at night in the minor leagues..

~Ernie Ovitz 1885–1980 (Cubs 1911)
If you want to go back in time to watch Ernie Ovitz pitch, simply set the wayback machine to June 22, 1911 and go to West Side Grounds in Chicago. The Cubs were getting walloped that day by the Pirates and the University of Illinois product was brought in to pitch the last two innings. Among the players he faced: Hall of Famer Honus Wagner.

~Frank Donnelly 1869–1953 (Colts 1893-1894)
How long ago did Frank Donnelly pitch for the Cubs (then known as the Colts)? There is no record of whether he was a right-hander or a lefty. What is known is that he wasn’t very good. In eight appearances his ERA was over six.

~Jose Cardenal 1943– (Cubs 1972-1977)
Jose Cardenal was one of the most colorful players to wear a Cubs uniform. With his gigantic afro, his hat tucked into his back pocket, and his crouched batting stance and running style, he was easy to spot. But he was also an interesting guy, prone to some rather unusual on- and off-the-field incidents. A lot has been made of his embarrassing injuries (covered later in this book), but he also once caused the injury of the Cubs best pitcher in a very unusual way. Jose was trying to steal home, and Fergie was at-bat and didn’t know Jose was coming. Cardenal ran right into his star pitcher, knocking him out of the game. His big off-field controversy came in 1975 when he was charged with resisting arrest after a confrontation with police at O’Hare. Jose was being picked up by his wife, and when he saw her arguing with a cop, he grabbed the cop’s nightstick and hit him with it. (He later filed a $750,000 lawsuit against the city — charging police brutality — and it was settled out of court.) He may have been mercurial, but Jose Cardenal was a crowd favorite throughout his Cubs years. Though he played for other teams in other towns and coached for other teams in other towns, he always considered Chicago his American home. (Photo: Topps 1975 Baseball Card)