*Winston Churchill resigns as the United Kingdom’s Prime Minister after his Conservative Party is easily defeated by the Labour Party in the 1945 general election. Clement Attlee becomes the new Prime Minister.

*A B-25 bomber crashes into the Empire State Building, killing 14 people, including all on board.

*After delivering the Atomic Bomb across the Pacific, the heavy cruiser USS Indianapolis is hit and sunk by torpedoes from the Japanese submarine I-58 in the Philippine Sea. Some 900 survivors jump into the sea and are adrift for up to four days. Nearly 600 die before help arrives. Captain Charles B. McVay III of the cruiser is later court-martialed and convicted.

*Irv Kupcinet turns 33. (photo) He is working as a sportswriter for the Chicago Daily Times.

*Chicago Tribune headline and sub-headline: 20,000 IN CHICAGO END PLANE ENGINE STRIKE: The three-day strike of more than 20,000 workers at the Dodge plant here of the Chrysler Corporation, which halted production of Superfortress engines urgently needed, was suddenly ended today.

*PRICE CHECK: A movie ticket is 40 cents, a typical restaurant lunch is 50 cents.

*Cubs purchase pitcher Hank Borowy from New York Yankees. Everyone assumes Yankees owner Larry MacPhail must be pulling a fast one, because Borowy is the best pitcher in the American League. He is 10-5 on the season and has a great ERA. MacPhail doesn’t think he’s durable enough, which turns out to be true…but not until next year.

*The first-place Cubs, in winning a double header with the Reds, have won 24 of their last 29 games.

*4044 women are admitted free to Wrigley Field by bringing cakes and cookies for the American Servicemen’s Center. The Cubs got shut out by the Pirates, 1-0.

*“Sherlock Holmes and the Woman in Green” starring Basil Rathbone premieres on July 27. 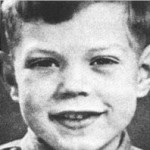 *Jason Robards Jr. celebrates his 23rd birthday while serving in the Navy aboard the USS Nashville near Pearl Harbor.

Cub of the week: HANK BOROWY 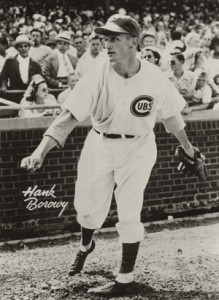