Every Cub Ever (E)

~Eckhartz Press (Cubs book publisher)
Eckhartz Press is the publishing wing of Just One Bad Century and has published “Cubsessions” by Becky Sarwate-Maxwell and Randy Richardson (a book featuring interviews with famous Cub fans talking about their love of the team), “Best Seat in the House: Diary of a Wrigley Field Usher” and Randy Richardson’s “Lost in the Ivy”. They’ve also published several of the books written by our editor in chief Rick Kaempfer, including “Father Knows Nothing,” “Records Truly Is My Middle Name” (co-written with John Records Landecker), and “The Living Wills” (co-written with Brendan Sullivan), and a book written by our marketing director David Stern (“The Balding Handbook: Five Stages of Grieving for Your Hair Loss”). All are worth a read if you’re a fan of this site. Click here to go Eckhartz Press.

~Mark Edwards (Cubs fan/Cubs blogger)
Mark is the bravest of all Cub fans–an openly practicing Cubs rooter living in the middle of Cardinal nation. His blog is called Mark’s Cubs Worship Pulpit. In addition to writing about and promoting the Cubs from within the belly of the beast, Mark is a social media and branded content expert, and the CEO of Mark Edwards Worldwide.

~Donald G. Evans (Cubs author/editor)
In 2008 was in the editor in chief of a great Cubs book called “Cubbie Blues: 100 Years of Waiting for Next Year.” The book is is an anthology chronicling the longest losing streak in sports history. Acclaimed authors such as Rick Kaempfer (Just One Bad Century’s Editor-in-Chief), Scott Simon, James Finn Garner, and Sara Paretsky take their places besides fans like the Shawon-O-Meter inventor, Mike Murphy and Pat Brickhouse. The unique blend of voices, ranging from best-selling authors to long-time beer venders, explores the relationship these loyal fans have to their dubious team. It’s available via Can’t Miss Press.

~The Evil Eye (Cubs 1939)
In the midst of the Depression, the average yearly American worker’s salary was $1250. We really have no way of tracking how much baseball players were making before 1934, but after the New Deal passed, publicly held companies were forced to reveal all salaries in excess of $15,000. In 1934, the Cubs had exactly two players in the $15000+ club: slugger Chuck Klein ($30,000), and Charlie Grimm ($18,361). Two years later, Gabby Hartnett, the biggest Cubs star of the 1930s, joined the club with a whopping $19,385 salary. Meanwhile, P.K Wrigley was wisely putting his money where it could do the most damage. During one fateful season during the Depression, he hired an “Evil Eye” expert to “put the whammy” on the opposition. That’s not a joke. According to Bill Veeck, who worked with the Cubs at that time, Wrigley had witnessed the “Evil Eye” achieve incredible success in the wrestling ring, and wanted him to recreate that success with the Cubs. When Wrigley brought this up at a team meeting, none of the people working for him wanted to embarrass the boss by pointing out how stupid he was to fall for this obviously staged gimmick, so no one stopped him from making the hire. Instead, they told him to keep it quiet–to make sure the rest of the league didn’t find out. The Evil Eye’s salary was $5000 (about 25% of star player/manager Gabby Hartnett’s salary that year), and he was promised an additional $25,000 if the Cubs won the pennant. At first he sat in the pitcher’s line of vision and tried to “put the whammy” on him from there. Soon he discovered that nine innings was a real long time, and Wrigley Field could be a real cold place, so he requested to put the whammy on the play-by-play ticker in the privacy of the boss’ warm office instead. Needless to say, it didn’t work out so well. The Cubs didn’t win the pennant that year (1939), and the “Evil Eye” idea was scrapped after that season. Is it possible that the “Evil Eye” put “the Whammy” on the Cubs by mistake? That sure would explain a lot.

Videos (and audio) beginning with the letter E… 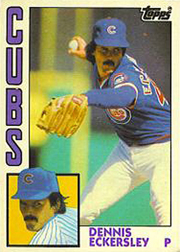