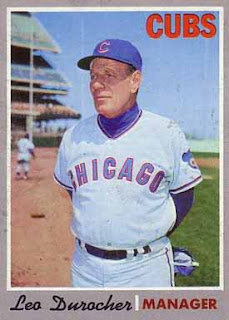 ~Leo Durocher 1905–1991 (Cubs manager 1965-1972)
How did people really feel about Leo Durocher? A quote from Jack Brickhouse: “In the early days Leo was an SOB, but a sharp SOB. By the time he finished in Chicago he was just an old SOB.” Suffice it to say, Leo was not beloved. When he was a player, he once gave Babe Ruth a black eye. He was such a taunter that he was thrown at by Cubs pitchers…while he was in the dugout. And he didn’t suddenly become Mr. Nice Guy when he became the Cubs manager. He punished players that beat him at Gin Rummy (especially Ken Holtzman). He once ripped the phone out of the dugout in Houston and threw it onto the field because he was upset at a scoreboard cartoon (1965). He set up a folding chair in the dugout in 1967 so his buddy Frank Sinatra could watch the game from there. His third base coach walked out on him in the middle of a game (Pete Reiser). He left the team in June 1969 for his bachelor party, and blew off two more games to visit his new wife’s (Lynne Walker Goldblatt) kids in Wisconsin. Leo was fired in July of ’72. He was fired for the same reason he was fired everywhere else he had ever worked. He couldn’t zip his ever-famous lip. If ever a person deserved a nickname, it was Leo ‘The Lip’ Durocher. These audio clips better describe what we mean…(Photo: Topps 1970 Baseball Card)
AUDIO:

~Bump Wills 1952– (Cubs 1982)
His real name is Elliot Taylor Wills. When he was a boy his big brother Barry called him “Bumpy” and it was later shortened to “Bump”. Bump is the son of legendary Dodgers shortstop Maury Wills, and never quite managed to escape his father’s shadow. In fact, throughout his baseball career, Bump tended to be known more for the circumstances surrounding him than his baseball ability (which was, in all fairness, pretty solid). It began in his rookie season with the Rangers. He replaced Lenny Randle at second base, which led to Lenny punching manager Frank Lucchesi in the face. (Both of them later ended up with the Cubs.) Wills came to the Cubs in 1982 and was their starting second baseman that year. He hit a home run in his first at-bat, hit .272 for the season, and stole ten bases, but once again, he won’t be remembered for that. He’ll be remembered for who replaced him at second base the following spring: a youngster by the name of Ryne Sandberg. The player who took his number a few seasons later (#17) also became a well-known Cub: Mark Grace. (It’s now Kris Bryant’s number.) Wills’ lone season with the Cubs turned out to be his last season in the big leagues. That 1982 Cubs team, by the way, had three future Hall of Famers (Fergie Jenkins, Ryne Sandberg, and Lee Smith), a future Cy Young winner (Willie Hernandez), and great players like Bill Buckner, Larry Bowa, and Leon Durham. They finished in 5th place.

~Larry Biittner 1945– (Cubs 1977-1980)
Of all the Cubs players in history with two consecutive “i’s” in their last name, Larry Biittner was the greatest of them all. Unfortunately, he cost the Cubs a perennial power hitter, Andre Thornton. (Let’s not quibble that a 1B who hit over 250 home runs was too high a price to pay). As a regular who split time between 1B and LF, Biittner did manage to hit .298 with 12 homers in 1977, but after that season he was mostly an extra outfielder. He never had as many as 350 at-bats in his other Cubs seasons, and after 1980, the Cubs let him go. Still, when he was batting, he remains the only Cubs batter who ever heard “good eye, good eye” and wondered if someone was making fun of the spelling of hiis name.

~Enrique Wilson 1973– (Cubs 2005)
Wilson played nine seasons in the big leagues, mostly as a backup infielder. After stints with Cleveland, Pittsburgh, and the Yankees, he finished his career with the Cubs. In 25 plate appearances, he batted .136. How’s this for a fluke statistic? In his career, Wilson batted over .400 against Hall of Famer Pedro Martinez. He faced him 25 times.

~Tom Goodwin 1968– (Cubs 2003-2004)
Goodwin was a speedster for the Dodgers, Royals, Rockies, Rangers, and Giants before joining the Cubs at age 34. His speed wasn’t quite what it once was, but Goodwin was nevertheless an important outfield reserve during the division-winning 2003 season. He stole 24 of 369 career stolen bases with the Cubs. When the Cubs released him after the 2004 season, his playing career was over. He remains in baseball as a coach.

~Jack Hiatt 1942– (Cubs 1970)
Hiatt was a backup catcher for the Cubs in 1970, getting pretty extensive at-bats during a year Cubs starter Randy Hundley was sidelined. He hit .242 in that role. It was his only season in Chicago. He previously served as a backup catcher in San Francisco, Los Angeles, and Montreal, and finished up his career with the Houston Astros. The Cubs acquired him from Montreal for Boots Day. After his playing career he managed in the minor leagues for the Cubs many years, and later became the director of player development for the Giants.

~Zack Taylor 1898–1974 (Cubs 1929-1933)
Taylor was a backup catcher to Gabby Hartnett, which meant that he didn’t get a lot of playing time. His best year with the Cubs was their World Series year of 1929. With Hartnett injured, Taylor was the starting catcher for that series, and hit .176. He later went on to manage the St. Louis Browns.

~Jack Doscher 1880–1971 (Cubs 1903)
Doscher was a pitcher in the big leagues for five seasons, yet he only managed to win two games. Neither of those came for the Cubs. He pitched in exactly one game for Chicago, on July 2, 1903. He started the game for the Cubs that day and was knocked out of the game in the fourth inning. His father Herm also played for Chicago.

~Yoervis Medina 1988– (Cubs 2015)
Medina was acquired by the Cubs in the trade that sent Wellington Castillo to the Mariners in 2015. He only got a cup of coffee with the Cubs, appearing in five games, all in relief. It didn’t go so well for him. In nine innings of work, his ERA was 7.00. 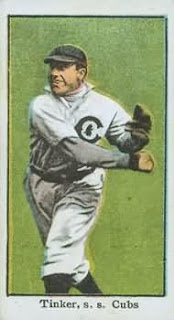 ~Joe Tinker 1880–1948 (Cubs 1902-1912, 1916, Cubs manager 1916)
Tinker was the shortstop for the Cubs dynasty of 1906-1910, and he had many dramatic hits along the way. He also served as the player/manager for the Cubs in their first season at Wrigley Field (after serving in the same capacity in the first two seasons at Wrigley — then with the Federal League Whales). Ironically, Tinker didn’t get along with his double-play mate Johnny Evers. What caused this unfortunate rift? According to Tinker, Evers started it because he ditched Tinker once and got a cab without him…which was of course unforgivable. They didn’t speak to each other for thirty years. After his playing days, Tinker became a wealthy businessman, but lost it all in the stock market crash. Then in 1938, Tinker and Evers were asked to broadcast the World Series together. Both later admitted being more nervous about seeing each other again, than they were about their maiden broadcasting voyage. But when they saw each other, they smiled and hugged. They enjoyed a tearful reunion, and after that became friends once again. In 1946, they were inducted into the Baseball Hall of Fame together (along with the deceased Frank Chance). Evers died the following year, and Tinker the year after that. In death they are always remembered together, but in life, they spent most of their time apart.