Historical Events: Where the Cubs? (February)

Where were the Cubs?

February 6, 1911
The most famous Cubs fan in history was born on this day. His name was Ronald Reagan. Reagan didn’t just grow up a Chicago Cubs fan. He owes much of his success to the team. 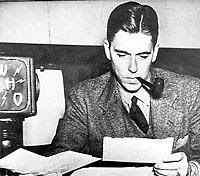 Following college graduation, Reagan landed a job as a radio announcer at WOC in Davenport, Iowa and later at WHO in Des Moines. Radio was a brand new medium in those days and he discovered quickly that getting in on the ground floor was his ticket to the top. He began broadcasting Chicago Cubs baseball games he had never seen. His descriptions were largely improvised, and were based solely on telegraph accounts of games in progress. On June 7th, 1934, something dramatic happened. The telegraph went out. This is how Reagan described what happened next.

“There were several other stations broadcasting that game and I knew I’d lose my audience if I told them we’d lost our telegraph connections so I took a chance. I had (Billy) Jurges hit another foul. Then I had him foul one that only missed being a home run by a foot. I had him foul one back in the stands and took up some time describing the two lads that got in a fight over the ball. I kept on having him foul balls until I was setting a record for a ballplayer hitting successive foul balls and I was getting more than a little scared. Just then my operator started typing. When he passed me the paper I started to giggle – it said: ‘Jurges popped out on the first ball pitched.’”

Despite working in Iowa, he was voted as one of the top ten most popular baseball announcers in America. In 1937 his radio station sent him out to California to cover the Cubs in spring training. At that time they trained at Catalina Island. Reagan parlayed that trip into a screen test…and the rest, as they say, is history.

Reagan made one last stop at Wrigley Field the last year of his presidency (1988). He threw out the first pitch, and spent some time in the broadcast booth alongside Harry Caray.

Chicago restauranteur Ernie Byfeld died on this day. At the time of his death, he owned and operated the most famous restaurant in Chicago–The Pump Room in the Ambassador East Hotel. It had been open for twelve years when Byfeld passed away. Some members of the Chicago Cubs helped christen the restaurant on the day it opened…just four days before the 1938 World Series. Among the ballplayers that dined there; Cubs greats Dizzy Dean and Gabby Hartnett. On opening night, celebrities like those ballplayers and actress Gertrude Lawrence, who was starring in a play in Chicago, established its reputation. From that moment on, The Pump Room became the place to see and be seen, and Booth One became one of the most renowned tables in the country. People dined at the Pump Room just to see who was in Booth One. One night it would be John Barrymore. Another night, Bette Davis. Still another, Jane Russell (Photo at The Pump Room). Two extremely famous couples went to Booth One on the night of their weddings: Humphrey Bogart & Lauren Bacall, and Robert Wagner & Natalie Wood. When she was a girl, Liza Minelli spent many nights in Booth One with her mother Judy Garland. Judy even included a reference to the restaurant in her version of the song “Chicago”. And Frank Sinatra dined there many many times.

The Pump Room continued to be a go-to place long after Byfield died in 1950. Irv “Kup” Kupcinet of the Chicago Sun Times was there all the time, meeting and greeting the stars. Ed Sullivan camped out there when he was in Chicago. Paul Newman and Robert Redford lunched on ham sandwiches and pilsners every day during the shooting of “The Sting”. Michael J. Fox, Eddie Murphy and Jim Belushi all dined there while they were in town. Even rock and rollers stopped by. When the Stones were hanging out at the Playboy Mansion around the corner, Mick Jagger ate at the Pump Room. David Bowie and Fleetwood Mac ate there too. Only one rock star was refused entry; the drummer of Genesis, Phil Collins. He was so offended at being stiffed (because of a dress code violation), he named his solo album “No Jacket Required.” (The restaurant apologized by sending him a new “jacket” after the album became a hit.) The Cubs’ greatest connection to the Pump Room was a certain announcer who lived in the Ambassador East hotel for twenty five years and dined there all the time: Harry Caray.

February 14, 1929
On this day in 1929 one of the most famous and gruesome events in Chicago occurred: The Saint Valentine’s Day Massacre. And it happened only a few blocks away from Wrigley Field at the S.M.C. Carting Company (2122 N. Clark St). The intended target was North Side crime boss Bugs Moran (a Cubs fan).

Ironically, Bugs Moran, was not among the dead. He arrived late. He just happened to see the suspicious arrival of the police car on his way to the garage that doubled as a gang hideout, and got out of there unscathed. The men who died were Reinhold Schwimmer (an optometrist who had met Bugs because they both lived at 2100 Lincoln Park West), 41-year-old Bugs accountant Adam Heyer, 39-year-old James Clark, 40-year-old safe-cracker Johnnie May, 36-year-old speakeasy owner Al Weinshank, and hired guns Frank (40) and Pete (36) Gusenberg.

To say that Chicago was a rough town in 1929 is to understate the level of violence, crime, and vice. The Cubs team that played at Wrigley Field that summer, however, fit the mood of the town perfectly. Some of the Cubs were pretty comfortable running in these circles, particularly centerfielder Hack Wilson and pitcher Pat Malone. Both were heavy drinkers, and in the Prohibition era, the only places to drink were illegal speakeasies run by the very same gangsters who perpetrated the massacre. Al Capone’s Cicero speakeasies were favorite destinations of both Wilson and Malone. (Drinking eventually ended both of their careers and lives–they each died in their 40s.) The Cubs were the toast of that unbelievably rough and tumble Chicago during the summer of 1929, as they made it all the way to the World Series, losing to the Philadelphia A’s in 5 games.