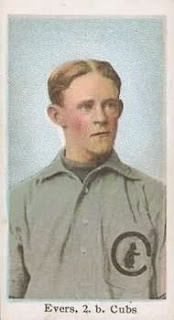 ~Johnny Evers 1881–1947 (Cubs 1902-1913, Cubs manager 1913)
Johnny Evers was the starting second baseman for the greatest Cubs team of all-time, the 1906-1910 dynasty. He got his nickname, the Crab, for the way he sidled up to grounders, but he lived up to his nickname in another way. Evers was only 120 pounds, but he was known as tough and humorless. For instance, he didn’t talk to the other half of his double play combination, shortstop Joe Tinker, for many years. According to Evers, Tinker started the fight in 1907 by throwing a ball too hard at Evers, breaking his finger. Then he laughed…which is, of course, unforgivable. The two didn’t talk, other than what they needed to say on the field, for over thirty years. First baseman/manager Frank Chance also didn’t like to listen to Evers’ constant bitching. He once considered moving him to the outfield just so he didn’t have to hear him in his one good ear.The umpires didn’t like him either. He must have set the record for ejections after arguments with umpires. But Johnny Evers was a great fielder, a sparkplug on the offense, and despite his grumpy disposition, deserves his status as a member of baseball’s Hall of Fame. (Photo: 1910 Tobacco Baseball Card)

~Moe Drabowsky 1935–2006 (Cubs 1956-1960)
Moe was born in Poland and was a hot young gun pitcher for the Cubs in the late 50s. His best season with the Cubs was probably 1957, when he won 13 games as a 22-year-old for a very bad Cubs team. He never lived up to that in the following years, so the Cubs eventually gave up on him. He later pitched for the Braves, Athletics, and Reds in the early 60s, but really found a home in Baltimore. Moe became a key part of the bullpen for two World Series champions Orioles teams in 1966 and 1970. He beat Don Drysdale to win Game 1 of the 1966 World Series. Moe ended up pitching 17 years in the big leagues.

~Kyuji Fujikawa 1980– (Cubs 2013)
Fujikawa was brought in from the Japanese league to be the Cubs closer. He had incredible success in Japan, saving 220 games for Hanshin. Unfortunately for Kyuji and the Cubs, he developed arm problems early in his first season in Chicago. He has only pitched in a handful of games since.

~Nelson Mathews 1941– (1960-1963)
Mathews was a center fielder with pop, but he couldn’t break the Cubs lineup. He served as a backup for several seasons, getting his most extensive shot in 1963. The Cubs traded him to Kansas City after the season, and the A’s gave him the starting center field position. He hit 14 homers, but led the league in strikeouts. That was his last shot at a starting position in the big leagues.

~Billy Holm 1912–1977 (Cubs 1943-1944)
The local Chicago boy got his shot with his hometown Cubs during the war. He was in his 30s when he broke in to the big leagues. Billy was a decent catcher, but unfortunately Holm simply couldn’t hit big league pitching, even wartime big league pitching. In two seasons in Chicago he hit .067 and .136, respectively. 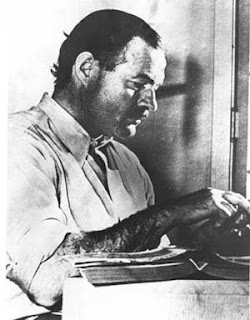 ~Ernest Hemingway (Cubs fan 1899-1962)
Hemingway grew up in Oak Park and was a precocious boy of 9 when the Cubs last won the World Series. He had more than a passing knowledge of that great Cubs team. His father was the doctor for Cubs owner Charles Murphy, and young Ernest saw his share of Cubs games at West Side Grounds. In 1949, he wrote a letter to his friend Ed recalling those days. He wrote: “I would say ‘Dear Lord, this isn’t as bad as what Frank Chance goes through every day, but please give me the courage to bear it like he does.’ Frank Chance couldn’t duck if they threw at his head. After he had his first concussion after I think it was Marquard hit him he would freeze, and nobody threw him anything that wasn’t high and inside. Finally he had such awful headaches that it was tough for me, a punk kid, to see him.” In the 1940s Hemingway invited ex-Cubs players like Billy Herman, Larry French, Augie Galan, and Curt Davis to hang out at his house in Cuba. But though he eventually became a Dodgers fan (all of those players ended up playing on the Dodgers after they left the Cubs–and the Dodgers trained in Cuba), his baseball teeth were cut in Chicago, watching the World Champion Chicago Cubs.