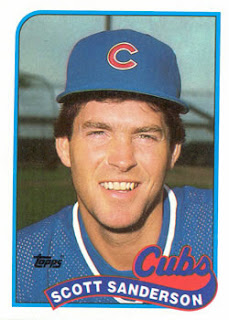 ~Scott Sanderson 1956–2019 (Cubs 1984-1989)
The local kid (Northbrook) was acquired by Dallas Green before the 1984 season in the trade that sent Craig Lefferts and Carmelo Martinez to San Diego. Sanderson pitched very well for the Cubs that year. He was the fourth starter behind Sutcliffe, Trout, and Eckersley. Although poor Harry Caray had a hard time differentiating him with Ryne Sandberg, often calling one Scott Sandberg and the other Ryne Sanderson. Sanderson’s only problem during his time with the Cubs was his inability to stay healthy. He only started more than 30 games three times, but two of those times were during years the Cubs went to the playoffs (1984 and 1989). He was the starting pitcher in the infamous Steve Garvey game (Game 4) in 1984, and pitched in relief of starter Greg Maddux in Game 4 of the 1989 NLCS. The Cubs lost both games. Sanderson left via free agency following that game and had a few more excellent seasons with the A’s and Yankees (including an All-Star season in 1991). He finished his career with 163 wins. (Photo: Topps 1989 Baseball Card)

~Cliff Johnson 1947– (Cubs 1980)
Johnson was a slugging catcher who hit nearly 200 career homers. Ten of those came with the Cubs in the second half of the 1980 season. The Cubs were very bad that year, but Johnson’s dramatic homers helped brighten a dark summer. After leaving the Cubs he became what he probably should have been all along — a designated hitter with the A’s, Blue Jays, and Rangers.