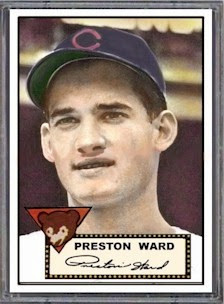 ~Preston Ward 1927–2013 (Cubs 1950, 1953)
Ward was Cubs property for four seasons, but he was serving in the military during two of them (1951-1952). He was a first baseman for the Cubs in 1950, and was known as a pretty good glove man, but he didn’t hit like a first baseman. Ward was not blessed with a lot of power. In nine big league seasons, he hit a total of 50 homers. Respectable, yes. But not what you’d expect from your corner infielder. Ward’s best season in the big leagues was probably 1958, when he batted .284 and clubbed ten homers for the Indians and Athletics. (Photo: Topps 1952 Baseball Card)

~Miguel Socolovich 1986– (Cubs 2012)
The Venezuelan right-hander appeared in only six games for the Cubs in 2012. He later pitched for the Cardinals and Braves. Miguel paid his dues in the minors, pitching for 12 seasons.

~Jason Smith 1977– (Cubs 2001)
Smith was an infielder who was drafted by the Cubs and came up through their system, but only got one at-bat in a Cubs uniform. He was part of the trade that brought Fred McGriff to Chicago. After leaving the Cubs, Smith was a backup infielder for the Rays, Tigers, Rockies, Blue Jays, Diamondbacks, Royals, and Astros.

~Mike Adams 1948– (Cubs 1976-1977)
Adams displayed a good combination of power and speed during his eleven minor league seasons, but never got an opportunity to display it in the big leagues. His stint with the Cubs consisted of 40 plate appearances over two years, and he barely hit over .100. He also got cups of coffee with the Twins and the A’s. His father Bobby played second and third base for the Cubs in the late 1950s.

~Joe Schultz 1893–1941 (Cubs 1915)
Schultz’s nickname was Germany, and the German-American played in the big leagues for eleven seasons, including briefly with the Cubs during their last season at West Side Grounds. He batted only eight times for Chicago, got two hits, and drove in two runs. Germany’s appeal was that he was a jack of all trades. The utility man parlayed his versatility into stints with the Braves, Dodgers, Pirates, Cardinals, Phillies, and Reds (every National League team at the time, except for the Giants). After his playing career ended he became the farm director for the Pittsburgh Pirates. He died of hepatitis at the age of 47.