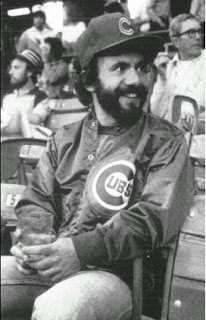 ~Steve Goodman (Cubs fan 1948-1984)
Steve Goodman was born on the north side of Chicago. His family later relocated to the northwestern suburbs (Steve attended Maine East in Park Ridge), so it was only natural that Goodman became a Cubs fan. His music career began the same year his beloved Cubs had one of their most memorable seasons, 1969, but his disappointment with the way that season ended was put into perspective by much more dire news he received that summer. He was diagnosed with leukemia. That was something he lived with throughout his music career. He was suffering from leukemia when he wrote “City of New Orleans” for Arlo Guthrie, which became a top 20 hit. And he knew his time left on this earth was limited when he penned a song that has become beloved by Cubs fan everywhere: “A Dying Cub Fan’s Last Request.” He also wrote the song “Go Cubs Go”, which became the Cubs theme song in 1984. He died on September 20th of that year, and went to his grave believing that the Cubs really were going to win the World Series.

~Mick Kelleher 1947– (Cubs 1976-1980)
In more than 1000 at-bats, covering 11 major league seasons (including five with the Cubs), Kelleher never hit a home run. He was the starting second baseman for the Cubs in 1976 but batted only .228. That led the Cubs to acquire Manny Trillo to cover the position the following year. Kelleher remained with Chicago in a mainly backup role for another four seasons. After his playing career he coached for the Yankees, Pirates, and Tigers.

~Whitey Lockman 1926–2009 (Cubs manager 1972-1973)
Whitey got his nickname when he was a kid. For his hair color, not his skin color. His real name was Caroll Walter Lockman, and he had been an All-Star player for the New York Giants team that Leo Durocher took to the championship. But Whitey Lockman also replaced Leo Durocher as the Cubs manager in 1972. Under Whitey’s tutelage, the Cubs went south fast. In his one full season (1973), they finished in fifth place.

~Jose Bautista 1964– (Cubs 1993-1994)
Not to be confused with the former Blue Jays slugger Jose Bautista, this Jose Bautista was a relief pitcher from the Dominican Republic. He had a great season with the Cubs in 1993, going 10-3, with a 2.82 ERA, and another good year in the strike-shortened 1994 season, but though he remained in the big leagues a few more seasons (with the Giants, Tigers, and Cardinals), he never again achieved the success that he had with the Cubs.

~John Tener 1863–1946 (White Stockings 1888-1889)
The Irish-born Tener was a pitcher for the Cubs (then known as the White Stockings) while they were being managed by Cap Anson. In 1889 he had a good season, winning 15 games, and eating up 287 innings. He only pitched one more year in the big leagues after that. After his baseball career, however, Tener went into politics. He served in the U.S. House of Representatives from Pennsylvania, before becoming the 26th Governor of Pennsylvania. After his political career he became the President of the National League, and had to rule in a case involving his former team–a dispute between Cubs owner Charles Murphy and Cubs second baseman Johnny Evers.