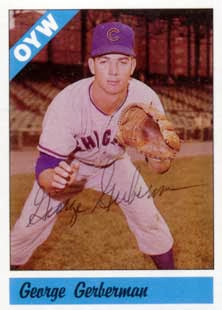 ~George Gerberman 1942– (Cubs 1962)
George got exactly one big league start, and it came for the Cubs on September 23rd. The location was the Polo Grounds, and the opponent was the worst team in big league history, the 1962 New York Mets. Gerberman lasted into the sixth inning and got a no-decision, although the Cubs eventually lost their 100th game of the season in the ninth. George walked five batters, but gave up only three hits. One of those hits was a home run by former Cub Frank Thomas. Gerberman’s only strikeout victim was future Cub Jim Hickman. George was only 20 years old at the time, but he never got another chance in the big leagues. He remained in the minors until 1968. (Photo: 1983 Fritch One Year Winners Baseball Card)

~Ryan Freel 1976–2012 (Cubs 2009)
Freel’s stay in Chicago was very brief. The Cubs were one of three teams he played for in 2009. He only managed four hits in a Cubs uniform after being acquired from the Orioles in May of that year. By early July he was gone. Freel was known as a bit of a flake. When he was with the Reds in 2006, he admitted that he often spoke to an imaginary voice in his head named “Farney”. His eccentricities were accepted by his teammates, however, because Freel was a take-no-prisoners rub-some-dirt-in-it kind of player who would do absolutely anything to help his team. Because of that, he suffered a series of concussions. In December of 2012, just a few years after retiring from baseball, Freel took his own life. His family had his brain examined after his suicide, and doctors found that he had been suffering from chronic traumatic encephalopathy–brought on by the many concussions.

~Toby Atwell 1924–2003 (Cubs 1952-1953)
He was an All-Star catcher with the Cubs in his rookie season of 1952, hitting .290. He would never get near that number again. Toby was one of the players sent to Pittsburgh in the trade that brought Ralph Kiner to the Cubs in 1953, and remained with the Pirates for the next four seasons.