~Dutch Leonard 1909–1983 (Cubs 1949-1953)
Dutch was one of the oldest players to ever suit up for the Cubs, and the oldest player in all of baseball during his time with the Cubs. Dutch was already 40 when the Cubs acquired the four-time All-Star (with the Senators during the war years) in 1949. They switched the knuckleballer to the bullpen, and in 1951, Dutch Leonard made the All-Star team a fifth time, at the tender age of 42. Dutch Leonard’s impressive 20-year big league career ended in 1953. He was 44 years old at the time. After his retirement, Dutch became the Cubs pitching coach for three seasons. (Photo: Bowman 1951 Baseball Card)

~Polly McLarry 1891–1971 (Cubs 1915)
His real name was Howard, but everyone called him Polly. McLarry wasn’t much of a major leaguer, but he was a minor league superstar. Polly was the best player on one of the best minor league teams in history (the 1921 Memphis Chicks). The first baseman led the team in hitting (.353) and the entire league in RBI and walks. His minor league numbers were staggering. He had an unbelievable 2723 hits in a 18-year minor league career, and his lifetime average was .317. It was a different story in the big leagues. Polly played for the White Sox briefly in 1912, and got one last shot with the Cubs three years later. That year he spent the entire season on the Cubs roster, but appeared in only 68 games, and hit .197. When the Cubs started the 1916 season in their new ballpark (now Wrigley Field), Polly was back in the minor leagues. He would never return to the show.

~Bill Carney 1874–1938 (Cubs 1904)
The career minor leaguer was brought up to play in a double header on August 24, 1904. He played in right field and went 0 for 7 with four strikeouts. He was 30 years old at the time. He played another seven years in the minors after his brief cup of coffee with the Cubs.

~Denver Grigsby 1901–1973 (Cubs 1923-1925)
Grigsby’s best season was 1924 when he was the team’s starting leftfielder. He hit .299 and played a very solid left field–leading the league in fielding percentage, assists, and double plays. But Denver didn’t really have the power to play a corner outfield position, and Cliff Heathcote was manning centerfield, so he went back to the bench in 1925. It was his last season in the big leagues. His name (Denver), by the way, was not a nickname. It was his given name.

~Jim Ellis 1945– (Cubs 1967)
Jim was a promising young starter in the Cubs minor league system. They promoted him the big club at the end of the 1967 season, when he was 22 years old. Ellis only got into eight games, but showed enough promise to attract the attention of the Dodgers. They traded for him (along with Ted Savage) after the season in return for Jim Hickman and Phil Regan–one of the best trades in Cubs history. Ellis got one last cup of coffee with the Cardinals in 1969, and was out baseball by 1971.

~Jeff Kunkel 1962– (Cubs 1992)
Kunkel was a successful utility man for the Rangers for several years. He played every position except catcher (including pitcher). The Cubs gave him his last shot in the big leagues when he was 30 years old in 1992. He had missed the entire 1991 season because of an injury. Kunkel didn’t have much left in the tank. He hit .138 in 29 at bats.

~Scott Sanders 1969– (Cubs 1999)
Sanders was a journeyman who pitched for seven big league seasons with the Padres, Mariners and Tigers before coming to Chicago. The Cubs were the last team to give him a shot. In 1999 he appeared in 67 games, but he was hit pretty hard. His ERA for the season was 5.52, and he gave up a whopping 19 dingers in just over a hundred innings. After his time with the Cubs, he pitched in Japan. 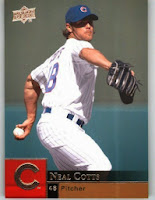