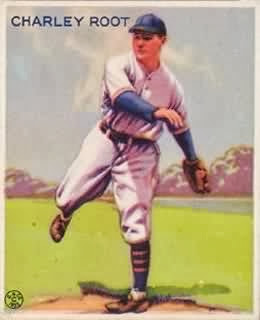 ~Charlie Root 1899–1970 (Cubs 1926-1941)
In 1969 Root was named the all-time greatest Cubs right-hander, but despite all his accomplishments, he’ll always be most remembered for something that probably never happened…Babe Ruth’s called shot during the 1932 World Series. Root always denied that Ruth really did it. “He was just saying he had one strike left,” Root insisted. The man that gave up the supposed called shot had a reputation as a headhunter, which is why it’s doubtful Ruth actually called the shot. How much of a headhunter was he? One time Charley was hit in the elbow by another pitcher (Adolpho Lugue). When he got back to the mound, he knocked down all nine guys on Lugue’s team. One after another, bang, bang, bang. He was going to keep going but the umpire finally stepped in after he got every guy once. How much of a headhunter was he? His nickname was “Chinski” because he wasn’t afraid to throw the ball right at your chin. Root pitched in four different World Series for the Cubs, but never won a post season game (0-3, 6.75 ERA in the WS). He did, however, win over 200 games for the Cubs (the only pitcher who ever did).

~Bill Gannon 1873–1927 (Orphans 1901)
Gannon was a career minor leaguer who got one cup of coffee in the big leagues in 1901. He was a 28-year-old rookie outfielder who filled in for future Hall of Famer Frank Chance (who hadn’t yet been moved to first base). Gannon went back to the minors after the season, and played baseball until 1907. His story does not have a happy ending, however. In 1927, Bill Gannon committed suicide in Fort Worth Texas.

~Fred Pfeffer 1860–1932 (White Stockings 1883-1889, 1896-1897)
Fred was one of the premier sluggers in the league during his years with the Cubs (then known as the White Stockings), finishing in the top ten in homers every season during his first stint in Chicago. He played mostly second base, but he also played all other infield positions if needed, occasionally played in the outfield, and even pitched a few times (he saved two games). Pfeffer jumped to the Players League (along with several of his teammates) after the 1889 season. He returned to play for the Cubs for the last two seasons of his career. He retired with 94 career homers (a very high total at the time), and 383 stolen bases. His nicknames were Fritz and Dandelion.

~Hy Vandenberg 1906–1994 (Cubs 1944-1945)
Vandenberg had been a fringe big league pitcher in the years before the war, pitching mainly in September for teams out of the pennant chase. He got a cup of coffee in 1935 with the Boston Red Sox (and was pounded), and then 1937-1940 with the Giants (and was pounded in each season). With the wartime Cubs of 1944, however, Vandenberg won seven games and pitched quite well in relief. He had another good season in 1945, and pitched brilliantly in relief during the World Series (3 appearances, 6 innings, only one hit allowed). When the big names returned to the game after the war, Hy stuck it out one more year in the minors, but it was clear he wouldn’t get another chance. The 40-year old hung up his spikes.

~Jerry Tabb 1952– (Cubs 1976)
Tabb was a first round draft pick by the Cubs in 1973 and displayed tremendous power in the minor leagues, but could never do the same in the big leagues. He got one shot with the Cubs at the end of the 1976 season and in his twenty four at bats, didn’t get a single extra base hit. The Cubs sold him to the A’s before the 1977 season.

~Gary Sinese 1955– (Cubs fan 1955-present)
He was born in Blue Island, but he grew up in Highland Park. As a young man he was one of the founders of the Steppenwolf Theatre in Chicago, but he really rose to fame playing the character Lt. Dan in the film Forrest Gump. But while we all knew he was from Chicago, with a birthplace like Blue Island, we couldn’t be sure if he was a Cubs fan or a Sox fan. The record over the past decade seems to have ended that speculation once and for all. In 2003, Gary was interviewed for the Cubs documentary “Chasing October,” and admitted something that surprised no one: He’s a die-hard Cubs fan. In 2004, Gary participated in the film “This Old Cub,” which told the gut-wrenching story of Ron Santo’s struggle with diabetes and his hopes for entry into Baseball’s Hall of Fame. Sinise recounted his memories of watching good ol’ #10 patrolling 3B for the Cubs in the sixties and early seventies. In 2009, he agreed to narrate the Cubs film “We Believe.” We believe, Gary. You are a true blue Cubs fan.

~Billy Corgan 1967– (Cubs fan 1967-present)
The founder and lead singer of the Smashing Pumpkins has the same disease we all do…Cubs-itis. He grew up in Chicago watching the Cubs with his grandmother (also a devoted fan). With Billy Corgan, that personal connection to the Cubs began there, and continued with a love he developed for their ballpark. He discussed the way he felt about Wrigley Field in the Chicago Tribune a few years ago. “Wrigley Field should never, ever be closed! EVER!!!That link to the past has everything to do with the traditional strong support of the Cubs fans … win, or lose … that should never be underestimated by the Cubs brass. Wrigley Field represents something even more important than any individual player … not even winning can change that” Billy Corgan was there for Game 7 in 2003. He sang “Take Me Out to the Ballgame” that night, after the Marlins had just added a few insurance runs. The entire ballpark was in a state of shock, and Billy was just as shocked…”It was like a funeral or an Irish wake. People were crying. It was horrible. Absolutely horrible. There are times in life when you think God is punishing you. That was one of those times.” Now that’s a Cubs fan. True Blue all the way. We feel your pain, Billy. We have the disease too.

~Bill Mueller 1971– (Cubs 2001-2002)
Mueller was a steady if unspectacular third baseman in the big leagues for over a decade, first with the Giants, and then with the Cubs. He was saving his best for last, however. The year after he left the Cubs he won the batting title with the Boston Red Sox. In his second season in Boston he was a key contributor to the Red Sox team that ended the 86-year World Series drought. He returned to the Cubs as a hitting coach in 2014.

~Scott Downs 1976– (Cubs 2000)
Scott wasn’t considered a great prospect during his time in Chicago, so the Cubs were excited that they could get Rondell White in exchange for him in 2000. They had no way of knowing that Downs would still be pitching in the league fourteen years later. He was a steady and reliable lefty out of the bullpen for the Expos, Angels, Blue Jays, Braves, White Sox, and Royals until 2014. 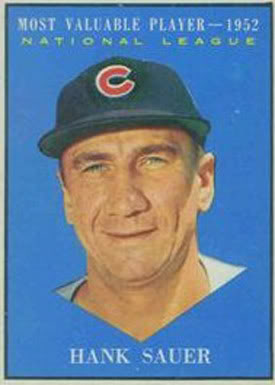 ~Hank Sauer 1917–2001 (Cubs 1949-1955)
Hank had a great 15-year big league career, and he was wearing a Cubs uniform during his best seasons. In his seven years in Chicago, Sauer hit 198 homers, thrilling the Wrigley Field crowd. In 1952 he led the league in homers and RBI and was named the league’s Most Valuable Player. Hank was known for the big wad of chew he had in his mouth. Every time he homered, the left field faithful would shower him with his favorite brand. Sauer was so popular during his days in Chicago, the press referred to him as “The Mayor of Wrigley Field.” His teammates, however, called him “The Honker” because of his rather large schnoz. The Honker had a great Cubs career, but his was probably his most memorable game…(AUDIO)