On St. Patrick’s Day we salute EVERY CUB EVER with the first name Pat.

~Paddy Driscoll (Cubs 1917)
Paddy Driscoll is a football hall of famer, but he also got a cup of coffee in Major League Baseball thanks to the Cubs. In 1917, the team’s second season at what is now known as Wrigley, he played in 13 games and got 32 at bats. Unfortunately, he only managed three hits. Among the games he played in was the famous double no-hitter on May 2, 1917, featuring Hippo Vaughn and Fred Toney.

~Pat Hughes (Cubs announcer 1996-present)
Pat has been the radio play by play for the Cubs for nearly 20 years and before that he worked in Milwaukee on Brewers broadcasts with Bob Ueker. We interviewed him once and asked him to compare and contrast Bob Uecker and Ron Santo. This is what he said: “In some ways the two of them are similar: They’re among the most popular figures in the history of their respective cities, they’re both ex-players, although granted—a slightly different caliber—Ron was a great player and Uecker was more of a mediocre one. But I consider myself incredibly fortunate to have worked with both of them. In addition, I worked with Harry Caray for two years, and did Marquette basketball with Al McGuire. Those are some larger than life personalities. I’m lucky to have known and worked with all of them.” Pat will also be in the Hall of Fame someday.

~Pat Luby (Colts 1890-1892)
In his rookie season of 1890, Luby won 18 straight games for the Cubs (then known as the Colts). That was a strange year in baseball history because there were three professional leagues, including a Player’s League (featuring many former Chicago players). After that season Luby only 20 more games in his career.

~Pat Mahomes (Cubs 2001)
Mahomes was a well-traveled journeyman pitcher who lasted eleven seasons in the big leagues. He pitched for the Twins, Red Sox, Mets, Rangers, Pirates, and Cubs. His lifetime ERA was over five, and he never registered double digits in either wins or saves, but he pitched in over 300 big league games. With the Cubs, Mahomes was 1-1, with a 3.86 ERA. 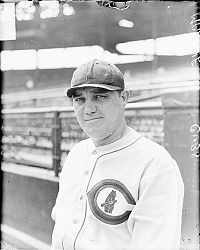 ~Pat Malone (Cubs 1928-1934)
Malone was a two-time 20-game winner with the Cubs and led the team to the 1929 and 1932 World Series, but he also hung out with Hack Wilson. When they weren’t playing baseball, they were either drinking or brawling. The stories are legendary. In Malone’s first season with the Cubs his roommate was Percy Jones. They didn’t get along. Jones insisted on getting a new roommate after Malone trapped some pigeons on a hotel ledge and put them in Jones’ bed as he slept. One night Malone and Wilson got into a huge fist fight in a hotel. They were walking down the hallway of their hotel, and Wilson laughed. Someone in a hotel room mimicked his laugh. Wilson and Malone broke into the room and beat the hell out of four men, until all of them were out cold. One of the men was still standing and Malone kept punching. Wilson pointed out that he was already knocked out. “Move the lamp and he’ll fall.” Malone moved the lamp, and the man fell to the ground. It didn’t end well for either man. Wilson was only 48 years old when he drank himself to death. Malone didn’t even last as long as Hack. He was only 40 years old when he died in 1943.

~Pat Moran (Cubs 1906-1909)
Moran was a member of the last two championship teams, the 1907 & 1908 Cubs, as their backup catcher. He later managed in the big leagues, and led the Cincinnati Reds to the World Series championship in 1919. It’s not Moran’s fault that the Reds’ opponent, the Chicago Black Sox, threw the series.

~Pat Perry (Cubs 1988-1989)
The Cubs got Perry in the trade that sent Leon Durham to the Reds. He was a member of the division champion 1989 Cubs team, but he was used sparingly out of the bullpen (19 appearances), and didn’t make the post-season roster. They released him in December of that year. He did manage to win two games and save two games during his tenure with the Cubs. 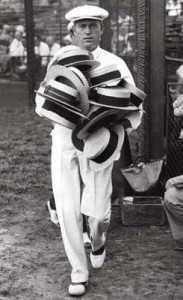 ~Pat Pieper (Cubs P.A. announcer/1916-1974)
He was known for his trademark opener…”Tention! Attention Please! Get your pencils and scorecards ready and I will give you the correct lineups for today’s game.” He got the job in 1916 when the Cubs first started playing in what is now known as Wrigley Field, and he kept the job until his death in 1974–an incredible streak of 59 years. When he first began, he had to do his job with a gigantic megaphone (this was before a public address system had been invented.) He said the starting lineups to the crowd from third base, and then did the same thing on the other side of the field from first base. In 1932, the Cubs finally installed a public address system. Pieper was the PA for 6 World Series, but he also handled those chores for the twenty consecutive seasons the Cubs finished in the bottom half of the league (1946-1966). When he died shortly after the 1974 season (October 22nd), the Cubs had just finished their most successful stretch since their World Series days.

~Paddy Quinn (White Stockings 1877)
Paddy was 16 years old when the Civil War ended–living in his hometown of Chicago. He embarked on a baseball career by the time he was 20, and played for several teams before the National League was founded. Paddy was 27 when he played for the Cubs (then known as the White Stockings) for four games in 1877. Unfortunately, the outfielder only managed to get one hit in 15 plate appearances.

~Pat Ragan (Cubs 1909)
Ragan had a couple of good seasons as a starting pitcher in the National League, winning 15 games one year for the Dodgers, and 17 games for the Braves another. He spent just a fraction of one season with the Cubs–his rookie season. Ragan appeared in two games as a reliever.

~Pat Tabler (Cubs 1981-1982)
He was involved in the same trade that brought Warren Brusstar to the Cubs, though neither of them were the main bargaining chips. The Cubs acquired Steve Trout in that trade, and the White Sox got Dick Tidrow. Tabler ended up playing in the big leagues for 12 seasons, and won a ring with the 1992 Blue Jays. His nickname was Mr. Clutch.

~Pat Wright (Colts 1890)
Wright was a second baseman who played 14 seasons in the minor leagues, and exactly one game in the big leagues. On July 11th, 1890, just a week after his 22nd birthday, Wright started at second base for the Cubs (then known as the Colts). He went 0 for 2 with a walk. Chicago lost the game 6-0 in Boston.