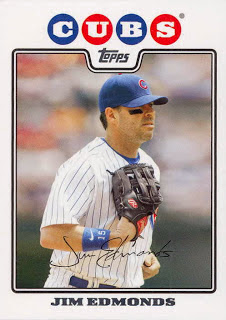 ~Jim Edmonds 1970– (Cubs 2008)
Edmonds was an eight-time Gold Glover and four-time All-Star with the Angels and Cardinals before coming to the Cubs from the Padres in the middle of the 2008 season. He had been a hated rival while a member of the World Series champion Cardinals, but Cubs fans warmed to Edmonds pretty quickly. He slugged 19 homers, many of them dramatic, and played a great center field. That turned out to be the last hurrah of Jimmy Baseball’s career. The Cubs opted not to re-sign him after the playoff collapse that year, and Edmonds finished his career with the Brewers and Reds in 2010. (Photo: 2008 Topps Baseball Card)

~Daryle Ward 1975– (Cubs 2007-2008)
Ward was the most important pinch hitter on two consecutive playoff teams for the Cubs. He also played a little first base and left field, but when the chips were on the line, manager Lou Piniella looked down his bench for Daryle. He got a RBI pinch hit in both playoff series.

~Danny Breeden 1942– (Cubs 1971)
Danny and his brother Hal both played for the Cubs. Danny was a backup catcher who got limited opportunities behind starter Randy Hundley, but one of those games just happened to be a no-hitter. Breeden caught Ken Holtzman’s no-hitter against the Reds on June 3, 1971.

~Wayne Terwilliger 1925– (Cubs 1949-1951)
Twig, as he was known by his teammates, made his big league debut for the Cubs on August 6, 1949. He made enough of an impression on the team to earn the starting second base job in 1950. He hit 10 homers for them that year. The following season he was traded to Brooklyn along with Andy Pafko, Johnny Schmitz, and Rube Walker in one of the worst trades in Cubs history. Twig later also played for the Senators, Athletics, and Giants.