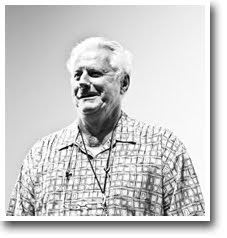 ~Dallas Green 1934–2017 (Cubs GM 1982-1987)
Dallas Green may have been a pretty good judge of talent (he brought Maddux, Palmeiro, Sandberg, Dawson, Grace, Smith, Moyer, Dunston, Sutcliffe, et al to the team), and he may have been gotten the Cubs as close to the World Series as anyone else did before Epstein, but he was also known for his prickly personality — not exactly the kind of personality you look for in a general manager. As a matter of fact, he had a ruthless streak. When he fired Billy Connors, a former Cubs pitcher and a widely respected pitching coach (after the 1986 season), he did it while Connors was in the hospital recovering from hip replacement surgery. According to the book Cubs Journal, Green pulled up to the hospital, left the car running, went up to Connors’ room and fired him, and then came back down to his car and drove away. Dallas Green resigned just over a year later, on October 29, 1987. He might have been difficult to deal with, but there’s no question that Green was one of the best general managers in Cubs history. In his post-baseball life, Dallas suffered an unspeakable tragedy. His granddaughter was one of the victims in the shooting spree that also injured congresswoman Gabrielle Giffords. Green passed away in March of 2017, just a few months after the Cubs finally did win it all.

~Tuck Stainback 1911–1992 (Cubs 1934-1937)
His real name was George Tucker Stainback, so it seemed obvious to call him Tuck…but it also just happened to create one of the all-time great names. Say it out loud: Tuck Stainback. It’s positively poetic. Stainback was a backup outfielder for the Cubs from 1934-1937. He’s probably best known for his ejection from the Cub bench for riding umpire George Moriarty during the 1935 Chicago-Detroit World Series. His taunting led to the entire dugout being thrown out of the game, which came back to haunt the Cubs in the ninth inning. The pitcher had to bat in a tied game with the winning run on third base because no one was left to pinch hit. Needless to say, the Cubs lost. Tuck was later a throw-in in the Dizzy Dean trade, one of the Cubs’ worst. After he retired, he helped organize Major League Baseball’s first pension for players in 1947.

~Bob Howry 1973– (Cubs 2006-2008, 2010)
Howry was signed as a free agent after proving he was over arm problems with a solid season in Cleveland. He had previously pitched for the White Sox and served as their closer. With the Cubs, he was a key member of their bullpen his first two seasons, and even pitched in the 2007 playoffs. But in 2008 he began to get hit pretty hard. He still appeared in over 70 games, but he gave up 90 hits, including 13 homers — a very large number for a reliever. The Cubs let him go after the season. Howry pitched for the Giants and Diamondbacks the next two seasons, but when he was waived by Arizona, the Cubs gave him one last shot. His final pitches in the big leagues came for the Cubs. As of Opening Day 2019, Bob is the last player in the big leagues to go by the name Bob.

~Troy O’Leary 1969– (Cubs 2003)
Troy played eleven seasons in the big leagues, and had a few very good seasons with the Boston Red Sox (over a hundred homers). The outfielder’s final big league season came with the Cubs. He was one of the contributors to the division champion team of 2003, although he didn’t make the final playoff roster.

~Rich Nye 1944– (Cubs 1966-1969)
The tall (6’4″) right-hander’s best season was 1967. He won 13 games for the Cubs (including seven complete games) while posting an ERA of 3.20. He remained in the Cubs rotation in 1968, although he only won 7 games. By his last Cubs season (1969), he was mostly used as a reliever. He later pitched for the Cardinals and the Expos. Nye was always one of the brightest players in baseball, and proved it after his playing career was over. He initially worked as a civil engineer, before going back to college (University of Illinois) and becoming a veterinarian.

~Gabe Gabler 1930–2014 (Cubs 1958)
Gabler was a power hitter during his 11-year minor league career, but he only got one shot at the big-time with the 1958 Cubs. He was used as a pinch hitter three times. His first time up he struck out in the 10th inning of a game in Philadelphia. The Cubs won it later that inning. His second shot came in the seventh inning of a game at Wrigley Field against the Dodgers. Gabe struck out. And in his final at-bat in the big leagues (also against the Dodgers at Wrigley), Gabe was brought in as a pinch hitter in the bottom of the ninth against former Cub Johnny Klippstein. There was no joy in Wrigley, as the mighty Gabler struck out again.

~Bill Schuster 1912–1987 (Cubs 1942-1945)
The New York native was known as “Broadway Bill” to his teammates. Schuster was a second baseman and shortstop who got quite a bit of playing time his first few seasons in Chicago. By his last year, the pennant-winning year of 1945, he wasn’t playing much. He did, however, get into two of the World Series games. He was a pinch runner, and scored the winning run in Game 6, in the bottom of the 12th inning at Wrigley Field. For 71 years he was the last player in Cubs history to score a game-winning run in a World Series game

~Henry Clarke 1875–1950 (Orphans 1898)
Clarke had two short cups of coffee in the big leagues while he was on summer break from college. He attended both the University of Chicago and the University of Michigan, and eventually became an attorney, but on July 5th, 1898, he got a chance to start a game for the Cubs (then known as the Orphans), filling in for the injured future Hall of Famer Clark Griffith. He pitched a complete game, gave up two earned runs and eight hits, and won the game.