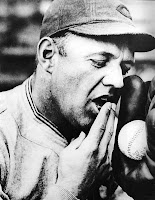 ~Burleigh Grimes 1893–1985 (Cubs 1932-1933)
Grimes never shaved on days he pitched, because the slippery elm he chewed to increase saliva irritated his skin, so he always had stubble on his face when he took the mound. That led to his nickname, Ol’ Stubblebeard. He wasn’t just known for his stubble, he was also known as one of the toughest competitors to ever take the mound. His scowl would have made Randy Johnson’s look like a smiley face, and when it was time to give someone an intentional walk, he was known to throw four pitches near the batter’s head. Grimes is a Hall of Famer, but certainly not for his one and half years with the Cubs (1932-1933). He was a five-time 20-game winner, but only went 9-17 for the Cubs. Ol’ Stubblebeard was the last legal spitball pitcher in the majors. When he retired, so did that pitch. (Wink, wink. Right, Gaylord Perry?)

~Bob Humphreys 1935– (Cubs 1965)
He was coming off a World Series appearance with the Cardinals when the Cubs acquired him in 1965. Humphreys was known for his strange pendulum-style windup which he referred to as the rocking chair. Bob pitched well for the Cubs, winning 2 games in 41 appearances out of the bullpen. But Humphreys wasn’t a fan of all the day games the Cubs played and asked out of Chicago. The Cubs obliged, sending him to the Washington Senators after the season.

~Mandy Brooks 1897–1976 (Cubs 1925-1926)
He was a 27-year-old rookie when he came to Chicago in May of 1925, but he was the team’s starting center fielder for the rest of the year. Brooks had a good year too, hitting .281 with 14 homers and 72 RBI. But Joe McCarthy took over the Cubs the following year, and Riggs Stephenson and Hack Wilson were brought aboard — a major upgrade in the outfield. Brooks hung on as a sub for the first half of the 1926 season, but was gone by the end of June. He played six more years in the minors before officially hanging up his spikes and returning to his native Wisconsin.

~Bernie Friberg 1899–1958 (Cubs 1919-1920, 1922-1925)
Bernie was the starting third baseman for the Cubs in 1923 and 1924 and hit quite well. In ’23 he drove in 88 runs and batted .318. He drove in another 82 runs the following season. Unfortunately, Bernie was also one of the worst fielding third sackers in the league, finishing the top five in errors both seasons. The Cubs cut him loose in 1925, and the Phillies picked him up and converted him into a utility man. Bernie spent eight seasons in Philadelphia, playing every position on the field except pitcher and catcher.

~William Marriott 1893–1969 (Cubs 1917-1920)
Marriott was a utility man for the Cubs, playing a little everywhere including 2B, SS, 3B, and OF. The problem was he didn’t play often. In parts of three seasons, he appeared in a total of 47 games. He later got a lot more playing time with Brooklyn and Boston.

~Eddie Hickey 1872–1941 (Orphans 1901)
Hickey was a backup third baseman for the 1901 Cubs (then known as the Orphans). Among his teammates on that team — future Hall of Famers Frank Chance and Rube Waddell. He hit .162 in his limited shot at the big-time. The rest of his 14-year baseball career was spent in the minor leagues.

~Justin Wilson 1987– (Cubs 2017-2018)
When the Cubs acquired the fireballing lefty from the Tigers, they thought he was the final piece to their bullpen puzzle. Wilson had been tearing it up for Detroit as their closer (13 saves, 2.60 ERA), and the Cubs merely wanted him to be the setup man for Wade Davis. Something must have happened on the flight to Chicago because Wilson simply couldn’t throw strikes. In 17 innings pitched, he walked 19 batters, and by the time the playoffs arrived, Wilson was on the very end of the Cubs bullpen bench. His 2018 season was much better, but the Cubs never quite felt like they could trust him, and let him go when his contract ran out. 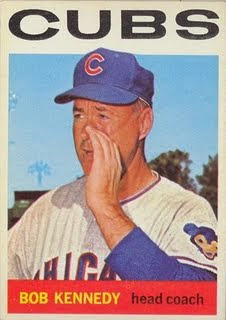 ~Bob Kennedy 1920–2005 (Cubs “Head Coach” 1963-1965, Cubs GM 1977-1981)
Kennedy was a very good big league player. He played 16 seasons in the majors (ten of those seasons were with the White Sox) and would have had a few more if the war hadn’t interrupted his playing career. The native Chicagoan was brought in to save the Cubs from their preposterous College of Coaches experiment. Although, P.K. Wrigley wasn’t quite ready to admit defeat about this plan — he still didn’t refer to Kennedy as a manager, only as the head coach. In his first year at the helm of the Cubs, Kennedy led them to their best season in years. The team finished over .500 — although that still placed them in the bottom half of the division. Nevertheless, with a good nucleus of players like Banks, Santo, Williams, and Brock, things looked like they were going in the right direction. The next year they regressed a bit (and traded Lou Brock), and by mid-1965, Kennedy was replaced by Lou Klein. In 1977, Wrigley brought Kennedy back, this time as the General Manager of the team. He held that position for 4 1/2 years before being replaced by Dallas Green. His best draft choice as the GM was probably Joe Carter. Of course, that pick was only made possible by the team’s horrendous play the year before (Carter was second overall pick). Kennedy’s son Terry was also a big league player. He was the starting catcher on the 1984 Padres team that broke the hearts of Cub fans everywhere. (Photo: 1964 Topps Baseball Card)