*At the Potsdam Conference, Truman and Churchill agree to use the recently-tested atomic bomb if Japan fails to surrender unconditionally, and the Allies select Nuremberg, Germany as the location for trials of Nazi war leaders. 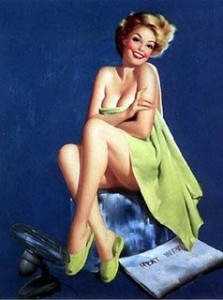 *The city is sweltering through a heatwave. The temperatures are over 95 degrees for most of the week, and there’s a shortage of ice.

*PRICE CHECK: A vacuum cleaner costs $40, and a pack of cigarettes is 12 cents.

*The Detroit Tigers and Philadelphia A’s play a 24-inning 1-1 tie.

*The Cubs go 3-2 for the week, but both losses were shellackings against their best pitchers. The Dodgers beat Passeau 12-5, and the Phillies beat Hank Wyse 11-6. The two Cubs aces both have double digit win totals already. (Passeau has 10, Wyse has 13)

*Don Knotts (photo) turns 21 while serving in the Army Special Services Unit entertaining the troops. He is not (repeat not) a cartoon fish.

*Ernest Hemingway celebrates his 46th birthday in Europe. He is “covering” the war, but is secretly leading resistance fighters. 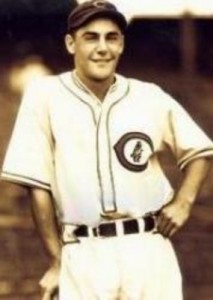 Cub of the week: PHIL CAVARRETTA
Phil a Chicago boy (Lane Tech), but by 1945 he is certainly no longer a boy. He’s in his twelfth season as Cub–at the ripe old age of 28. He’s also a World Series veteran, having played in both the 1935 and 1938 series.

Cavarretta is not a prototypical slugging first baseman. His best season for homers up until now was 1936 when he slugged a whopping nine homers. His best season for RBI was 1944, when he knocked in only 82 runs. That was also the only full season he hit .300 before this year (he hit .321). But Cavarretta is the heart and soul of the 1945 Cubs, and he is having a career season. When the year is over his average will be .355, and he will have driven in 97 runs–by far the best of his career. He will also be named the NL MVP, and will lead the Cubs to the World Series.

The Cubs won’t lose that series because of Phil, either. In 31 at-bats he will hit .423, and slug the only Cubs homer.