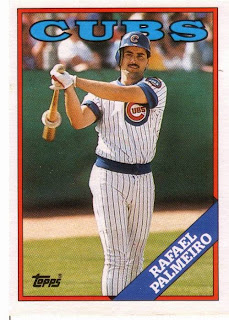 ~Rafael Palmeiro 1964– (Cubs 1986-1988)
Two incredibly bright prospects came up to the Chicago Cubs around the same time. Unfortunately, both Mark Grace and Rafael Palmeiro played the same position (first base). To get both of their bats into the lineup, Palmeiro was moved out to left field. His 1988 Cubs season was stellar. Palmeiro batted .307, slugged 41 doubles, and was named to the All-Star team. Naturally, the Cubs traded him after the season. They decided that Grace had better potential to develop power. It didn’t exactly turn out that way. Palmeiro was so upset he cried when he was traded along with another guy who wouldn’t amount to anything, Jamie Moyer, for Mitch Williams, Paul Kilgus, Steve Wilson, Curtis Wilkerson, Luis Benitez, and Pablo Delgado. Palmeiro had a Hall of Fame-caliber career (granted, perhaps with the help of some illegal substances). He was a four-time All-Star, three-time Gold Glover, and hit 569 career homers. Jamie Moyer pitched in the majors another 22 years. Not a good trade for the Cubs. (Photo: Topps 1988 Baseball Card)

~Mario Encarnacion 1975– (Cubs 2002)
The outfielder got to bat exactly nine times in a Cubs uniform. He didn’t get a single hit. The Dominican played nine seasons in the minors, mostly in the Oakland A’s organization.

~Dick Nen 1939– (Cubs 1968)
Nen backed up the aging Ernie Banks in 1968. Proving that age is relative, the younger Nen hit .181 with very little power (two homers), while Banks hit over 60 points higher with 32 homers. Nen also played for the Washington Senators and LA Dodgers in his six-year big league career. His son Rob later starred in the big leagues as a closer for the Marlins and Giants.

~John Kane 1882–1934 (Cubs 1909-1910)
Kane was a utility infielder for the Cubs team that was renowned for their defense. He backed up both Tinker and Evers. In 1910 Kane was on the postseason roster for the Cubs, and batted twice (without a hit) in the 1910 World Series. Kane died in an automobile accident at the age of 51.

~Jake Buchanan 1989– (Cubs 2016)
Jake pitched briefly for the Astros before being acquired by the Cubs. He spent nearly all of the 2016 season with Iowa, but was called up in September when the rosters were expanded and appeared in two games. He pitched for the Reds in 2017. 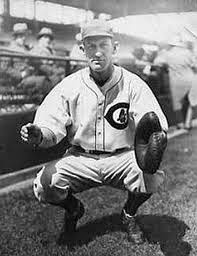 ~Mike Gonzalez 1890–1977 (Cubs 1925-1929)
The Cuban catcher was a trailblazer in baseball. He was the first Latin-American to ever play for the Cubs. The 35-year-old veteran provided some stability backing up young stud catcher Gabby Hartnett. Mike (real name Miguel) got his only World Series at-bat with the Cubs in 1929. Before coming to the Cubs, he also caught for the Braves, Reds, Cardinals, and Giants. He played in the big leagues for twenty years and coached and scouted many more after his playing career ended. He is said to have coined the term “Good field, no hit” when he was a scout.