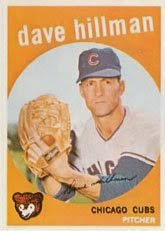 ~Dave Hillman 1927– (Cubs 1955-1959)
Hillman appeared in over a hundred games for the Cubs in the 1950s. The right-hander worked both as a starter and reliever, and had a respectable ERA, but he had the propensity to give up the long ball. After the 1959 season Hillman was traded to the Red Sox. He spent two years in Boston — the last season of Ted Williams’ career, and the first of Carl Yastremski’s.

~Jim Fanning 1927–2015 (Cubs 1954-1957)
Fanning was a minor league catcher who occasionally came up to the big club for a cup of coffee. All 64 of his games as a big league player came with the Cubs. But after his playing career ended, Fanning went on to have a very successful career working for the Montreal Expos. As the Expos GM, he traded for Rusty Staub and drafted Gary Carter and Andre Dawson. As the team’s manager, he led the Expos to their only playoff appearance in 1981. And finally, as the scouting and player development director, he developed the likes of Randy Johnson, Larry Walker, and Andres Gallarraga. Not bad for a Cubs catcher with a lifetime batting average of .170.

~John Bottarini 1908–1976 (Cubs 1937)
Bottarini was a minor league catcher for a whopping 18 seasons, and a big leaguer for one. He was 29 years old when he served as a backup for Gabby Hartnett during the 1937 season. He appeared in 26 games and hit one homer.

~Nick Allen 1888–1939 (Cubs 1916)
Allen was another catcher who played for the Cubs ever so briefly. His Cubs career lasted five games during the first year they played at Wrigley Field. Allen got on base exactly one time. He later played on the 1919 World Champion Reds: the team that won the “thrown” World Series against the White Sox. After his playing career he became a coach, scout, and mentor for several players who went on to have excellent big league careers, including Leo Durocher and Mark Koenig.

~Reggie Richter 1888–1934 (Cubs 1911)
Reggie (real first name — Emil) was born in Dusseldorf, Germany and came over to America around the turn of the century. Reggie was a pitcher who worked mostly out of the bullpen for one big league season. He pitched a few more years in the minors before hanging up his spikes at the age of 27. Richter passed away in Winfield, Illinois at the age of 45.