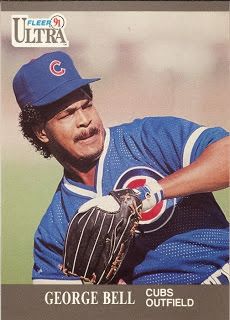 ~George Bell 1959– (Cubs 1991)
Bell was a three-time All-Star and former MVP when the Cubs signed him to a big free agent contract before the 1991 season. He had a good year with the Cubs, slugging 25 homers and hitting .285, but his long-term value to the Cubs came during the following offseason. The Cubs traded Bell across town to the White Sox for a young outfielder named Sammy Sosa. Bell contributed to the White Sox division-winning team of 1993, but Sosa went on to hit more homers in a Cubs uniform than any other player in history. (Photo: 1991 Ultra Fleer Baseball Card)

~Johnny Goryl 1933– (Cubs 1957-1959)
Johnny was a backup infielder (2B, 3B) for the Cubs in the late 50s. He got the most playing time in the 1958 season, when he hit four homers and hit .242 in over 200 at-bats. He later also played for the Minnesota Twins. After his playing career, he coached and managed for Minnesota, and worked in the front office for the Indians.

~Jack Hayden 1880–1942 (Cubs 1908)
Hayden was part of the 1908 Cubs team that won the World Series, but he didn’t play much. He hit .200 in eleven games, and played right field. He filled in when the Cubs were suffering a rash of injuries to their key players. 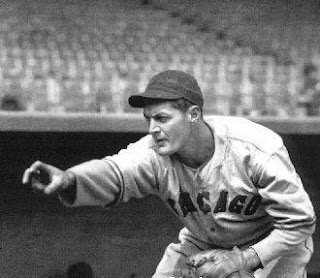 ~Bill Lee 1909–1977 (Cubs 1934-1943)
Lee was a great pitcher for the Cubs, winning 130 games, and having a few dominant seasons including the World Series years of 1935 and 1938. His teammates nicknamed him after the Confederate general from the Civil War because of his last name (they called him General), but also because he truly was a Southern gentleman. He was the ace of the staff during the 1930s, but in 1940, Lee developed eye problems and had difficulty seeing the catcher’s signs. He eventually got thick glasses, which helped a bit, but he was never the same. After he retired, he underwent delicate surgery for two detached retinas and eventually lost his sight.