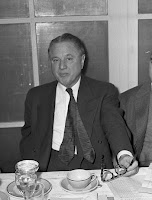 ~Wid Matthews 1896–1965 (Cubs GM 1950-1956)
When Matthews came to the Cubs in 1950, he arrived with a sparkling reputation. Wid had been an assistant to Branch Rickey with the Dodgers, and he promised to return the Cubs to their glory days. He did do one thing that was long overdue before he left town; he signed the first two African-American players in Cubs history — Ernie Banks and Gene Baker. Unfortunately, this was seven full seasons after Jackie Robinson had broken the color line, and three full seasons after Matthews arrived in Chicago. It was far too little, and far too late. Wid Matthews had a knack for trades…that is, trades that helped the other team. He traded fan favorite Andy Pafko, All-Star pitcher Johnny Schmitz, and two other players to the Dodgers for catcher Bruce Edwards (who had a grand total of 250 at-bats as a Cub), Joe Hatten (a pitcher with an ERA over five), outfielder Gene Hermanski (who managed a total of 8 home runs as a Cub) and Eddie Miksis (the main player the Cubs wanted — a mediocre shortstop who never hit higher than .251 in his four Cubs seasons). That deal was so bad people in Chicago wondered if he was still on Branch Rickey’s payroll. In 1952 he was holding a press conference before the season, predicting things were just about to turn around, when P.K. Wrigley walked into the press conference and ripped Matthews in front of the press, saying “I believe it’s about time we stopped our daydreaming and wishful thinking and faced things as they are.” When people starting hanging Matthews in effigy in 1956, Wrigley finally faced things as they were and got rid of him.

~Jigger Statz 1897–1988 (Cub 1922-1925)
His real name was Arnold John Statz, and he was a local boy — born in Waukegan, around the same time as Jack Benny. When he was little the folks called him “chigger bug” because he was so small. That was spelled incorrectly by his parents, and voila, the name stuck. For many years Jigger held the all-time record for professional baseball games played, although most of his (18 years) were played in the minors in Wrigley Field (the one in Los Angeles). He did play 8 seasons in the big leagues, and was the starting center fielder for the Cubs in the early 20s (1922-1925). Only eight players have more than 4000 career hits in professional baseball. Jigger Statz is one of them. He played in the minors until he was 44 years old. Because he was located in Los Angeles, Jigger also got into the movie business. He played himself in Fast Company in 1929, and served as technical advisor on the Grover Cleveland Alexander story The Winning Team in 1952.

~Leon Brinkopf 1926–1998 (Cubs 1952)
Leon started the season with the Cubs in 1952 as a backup infielder (shortstop) and pinch hitter. He only lasted until May 5th. After the game that day, Leon was sent back to the minor leagues, never to return. He had a couple of excellent seasons in the minors with the Cubs minor league team in Los Angeles, but wasn’t given another chance at the big-time.

~Skel Roach 1871–1958 (Orphans 1899)
Roach was born in Germany, and if his name doesn’t sound very German to you, there’s a good reason for that. His given name was Rudolf Weichbrodt. His teammates in semi-pro baseball couldn’t (or didn’t want to) pronounce his name. His manager thought he was skinny, so he called him Skeleton (or Skel for short). Another teammate gave him his last name Roach. Thereafter he went by Skel Roach. He only pitched one big league game, filling in for injured HOFer Clark Griffith. He won the game, but couldn’t come to contract terms with Chicago to stay with the team. He never got another chance.

~Jose Veras 1980– (Cubs 2014)
After a successful stint as a closer for the Astros, the Cubs signed Veras to be their closer in 2014. It became obvious early on that he couldn’t handle the job. In 12 appearances his ERA was over eight. Then he got hurt. When it was time to return to the roster, the Cubs cut him loose. Veras pitched for eight teams in his nine-year big league career.

~Marty Sullivan 1862–1894 (White Stockings 1887-1888)
Marty had a great rookie season with the Cubs (then known as the White Stockings) in 1887. The left fielder drove in 77 runs and batted .284. But Sullivan was also a bit temperamental. He got into a fight during a game in 1888 that had to be broken up by the police. He was arrested and charged with disturbing the peace. Although Marty played another four seasons in the big leagues with various different clubs, he never really approached the numbers of his rookie season again. In January of 1894, only two years after he played his last big league game, Marty passed away at the age of 31.