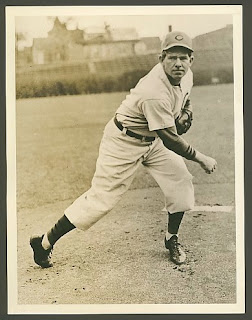 ~Paul Derringer 1906–1987 (Cubs 1943-1945)
To say that Derringer was a colorful personality is to understate the case. He got into quite a bit of trouble in the years before he joined the Cubs. He once woke up from an operation in a hospital recovery room, swung at a nurse, and knocked her out cold. Another time (in 1936), he got drunk and walked into the wrong party in a Philadelphia hotel. Derringer attacked an envoy of New York Mayor LaGuardia, who was there meeting with the Secretary of War, and put him in the hospital for eight weeks. His fighting wasn’t confined to off the field, either. In 1939, Derringer and Dizzy Dean got into a fistfight on the field before a game at Crosley Field. They wrestled each other to the ground right on home plate and exchanged punches before being separated by teammates. Despite his anger management problems, Derringer won over 200 games in his career, was an All-Star, and has the distinction of winning the first night game in baseball history (for the Reds in 1935). Unfortunately, he only pitched for the Cubs the last three seasons of his career. His very last game in the majors was the last World Series game in Cubs history for 71 years. He came in to relieve Hank Borowy in the first inning of Game 7 against the Detroit Tigers. Derringer pitched 1 2/3 innings, walked five, gave up two hits and three earned runs. In 1946, while pitching in the minors for Indianapolis, Derringer tried to bean Jackie Robinson on two different occasions. The second time he narrowly missed Robinson’s head — and Jackie hit a triple on the following pitch. After that, Derringer told Branch Rickey that Robinson “will do.” (1940s wire photo)

~John Mabry 1970– (Cubs 2006)
Mabry had his most productive seasons with the Cardinals early in his career, but he held on in the big leagues for 14 seasons. His second-to-last year was with the Cubs. In over 200 at-bats, Mabry hit only .205 for the Cubs. He played in the 2004 World Series that ended the Red Sox curse. Unfortunately for John, he was on the losing side (the Cardinals).

~Carlos Gonzalez 1985– (Cubs 2019)
When a three-time All-Star and three-time Gold Glover becomes available suddenly, it behooves you to check him out. That’s what the Cubs were thinking when the Cleveland Indians released Carlos. Cargo, as he was known, was only one year removed from a good season in Colorado. Surely he had something left in the tank, right? Not based on his time with the Cubs. He played in fifteen games, hit one homer, and managed only a .175 batting average. The Cubs released him one month and one day after they signed him.

~Johnny Klippstein 1927–2003 (Cubs 1950-1954)
Klippstein was a swing starter/reliever in his days with the Cubs. He has the distinction of winning the game at Wrigley Field on the same day and in the same town (July 1952 in Chicago) General Dwight D. Eisenhower was nominated to be president by the Republican Party. He beat the Brooklyn Dodgers that day. He later won the World Series as a member of the 1959 Los Angeles Dodgers (beating the Chicago White Sox). In his 18-year big league career, Johnny won 101 games, and saved 66 more.

~Johnny Ostrowski 1917–1992 (Cubs 1943-1946)
On March 3rd, 1945, Johnny was one of only six Cubs players who bothered to gather at Chicago’s Dearborn Train Station to board the train to spring training that year: pitcher Ed Hanyzewski, minor league pitcher George Hennessy, semi-pro pitcher Al Nusser, former Giants catcher Joe Stephenson, a young player that had virtually no chance of making the team — Virgil Garriot, and Johnny. It didn’t seem to help the local Chicago boy too much. Ostrowski played in only seven games with the Cubs that season. He batted .300 in ten plate appearances, and didn’t make the post-season roster. The third baseman later played for the White Sox and the Senators.

~George Nicol 1870–1924 (Colts 1891)
He came up with the St. Louis Browns the year before he joined the Cubs (then known as the Colts), and it’s hard to imagine a better start to a career. In his first start, he threw a no-hitter. In his second start, he gave up one hit. But the 19-year-old was hit hard in his third start, and never came close to those dizzying heights again. With the Cubs he pitched in three games and didn’t win any of them. His final lifetime ERA is north of seven.