~Francis Beltran 1979 (Cubs 2002-2004)
Not to be confused with slugging outfielder Carlos Beltran (no relation), this Beltran was sent to the mound from the Cubs bullpen. He was mostly ineffective in his two years with the Cubs, and later experienced serious arm problems while pitching for the Expos and Tigers.

~Dan McGinn 1943 (Cubs 1972)
McGinn was hit pretty hard during his one season with the Cubs. He appeared in 42 games, but he posted an ERA of 5.89. He also pitched for the Reds and Expos during his big league career.

~Irv Noren 1924 (Cubs 1959-1960)
Noren had a good big-league career that included an all-star appearance with the Yankees in 1954. By the time he came to the Cubs in 1959, Irv was mostly a backup outfielder. He hit over .300 in his first season in Chicago, but got off to a slow start in 1960 and was let go in May. He finished the year with the Dodgers and retired after the season.

~Carter Elliott 1893 (Cubs 1921)
Elliott was called up in September of 1921 and handed the shortstop job because starter Charlie Hollocher was ailing. Elliott hit .250 and played a respectable shortstop, but it apparently wasn’t good enough. He never got another shot at the big leagues.

~Shadow Pyle 1861 (White Stockings 1887)
One of the all-time great names–Shadow Pyle–only appeared in four games for the Cubs (then known as the White Stockings). Shadow Pyle (we just like saying the name) only won one of his four starts, and had terrible command–walking 21 batters in 26 innings. Shadow Pyle never pitched in the big leagues again. 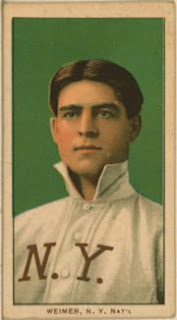 ~Jake Weimer 1873 (Cubs 1903-1905)
Tornado Jake Weimer was a pitcher who had three very good years with the Cubs (1903-1905). He won 20, 20, and 18 games respectively in those years, but Tornado Jake may have served the Cubs even better by being traded to the Cincinnati Reds. The man the Cubs got back in that trade was the final piece to their championship puzzle; the trivia question answer, Harry Steinfeldt, the “other” man in the Cubs Tinkers-to-Evers-to-Chance infield. Weimer won 20 games for the ’06 Reds, but then faded, while the Cubs won the next three pennants with Steinfeldt at third.