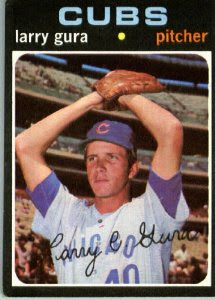 ~Larry Gura 1947 (Cubs 1970-1973, 1985)
Gura didn’t pitch too much for the team that drafted him. He appeared in a total of 54 games over four seasons (mostly out of the bullpen). The Cubs traded him for pitcher Mike Paul. Paul had very little left in the tank. Gura, on the other hand, was just getting started. He became an all-star and two-time 18-game winner for the Kansas City Royals. He pitched in the World Series for the Royals in 1980, but was released before they returned to the World Series in 1985. The team that picked him up to finish out his career? The Cubs. He went 0-3 with an 8.31 ERA. Overall, only 3 of his 126 career wins came with the Cubs. (Photo: 1971 Baseball Card)

~Richie Hebner 1947 (Cubs 1984-1985)
Richie Hebner was famous for working as a gravedigger at a cemetery run by his father during the off-season, and that’s where the nickname “The Gravedigger” originated. He played the last two seasons of his career with the Cubs (84-85), mainly as a pinch hitter, but got several key hits during the Cubs division winning season of 1984. In his years with the Pirates, Phillies and Cubs, he played in the NLCS eight times, and won it only once (1971 Pirates). He played 18 seasons in the big leagues, and hit over 200 home runs, but only five of them came with the Cubs.

~Matt Garza 1983 (Cubs 2011-2013)
Garza was a stud starting pitcher who had pitched a no-hitter and led his Tampa Rays to the World Series before he joined the Cubs. Matt was acquired for several prospects prior to the 2011 season; Chris Archer (who has turned out to be a very good pitcher) and three other players including Sam Fuld. Unfortunately, Garza never could put it together for Chicago. He had flashes of brilliance, and rashes of arm injuries. He was 6-1 in 2013 when the Cubs traded him to the Rangers for four prospects in 2013. Two of those prospects played for the Cubs in 2014 & 2015; Mike Olt, and Neil Ramirez. The other two are still part of the Cubs bullpen: Justin Grimm and Carl Edwards Jr.

~Ron Meridith 1956 (Cubs 1984-1985)
Ron was brought up in September of their division winning 1984 season but the lefty reliever didn’t really contribute much to that team. The following season he pitched in 32 games for the Cubs and posted an ERA of 4.47. The Cubs traded him to the Rangers in 1986.

~Jay Howell 1955 (Cubs 1981)
Howell went 2-0 for the Cubs during the strike-shortened 1981 season, but they traded him in the off-season to the Yankees for Pat Tabler. Howell went on to become a three-time all-star closer, and World Series champion. Tabler was included in the package that brought Steve Trout to the Cubs the following season.

~John Churry 1900 (Cubs 1924-1927)
Churry was with the Cubs for four full seasons but only appeared in 12 games during that time. He was the third-string catcher behind Gabby Hartnett and Bob O’Farrell (and later Mike Gonzalez).

~Hugh Duffy 1866 (White Stockings 1888-1889)
Duffy was a little guy (only 5’7″), but he was a great hitter. Sir Hugh, as he was known, was coming off a great season (12HR, 89RBI, .312 average) when he joined the player revolt and fled to the player’s league. When he returned to the National League, it wasn’t with Chicago. He played the rest of his career in Boston, where he was one of the best hitters in all of baseball. He had over 100 RBI seven seasons in a row, led the league in homers twice, won two batting titles, stole 574 bases, and won a Triple Crown. His lifetime batting average was .326. Duffy was elected into the Hall of Fame in 1945.

~Jim Canavan 1866 (Colts 1892)
Canavan was the starting second baseman for most of the 1892 season, but he had a hard time with the bat. He only hit .166 in 487 plate appearances–among the worst performances in Cubs history. He finished his career with Cincinnati.

~Clay Bryant 1911 (Cubs 1935-1940)
He was a journeyman pitcher for the Cubs until he suddenly blossomed and won 19 games out of nowhere in 1938. He pitched well in the World Series that year to the Yankees, at least for 4 innings, before losing Game 3, 5-2. The Cubs were eventually swept in the series. Unfortunately for Bryant, he came crashing back to earth pretty quickly. He had arm problems in 1939, and missed most of the year. When he started out the 1940 season with arm problems (elbow) again, Cubs owner PK Wrigley suspended him indefinitely without pay. Bryant wanted to go to LA to have his arm treated, but he couldn’t afford to do it without a steady paycheck, so he protested the suspension to Commissioner Landis. Landis sided with Wrigley, and Wrigley refused to buckle on the suspension. He did, however, find a way to help Bryant without losing face. Wrigley eventually paid Bryan’s wife $50 a week for 4 weeks to accompany him to Los Angeles. Clay Bryant got his treatment, but it didn’t help. He never made it back to the majors