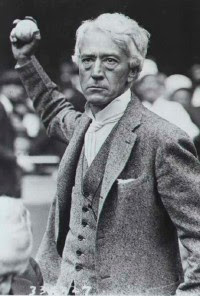 ~Judge Kenesaw Mountain Landis 1866 (Cubs fan 1893-1944)
On this day in 1866, the future first commissioner of baseball was born, Judge Kenesaw Mountain Landis. He is best remembered as the man who banned the Black Sox for life, and saved the game from the evils of gambling, but Judge Kenesaw Mountain Landis was a Chicago Cubs fan long before he took over baseball, and remained a Cubs fan until his dying day. He was named a federal judge by President Theodore Roosevelt during the heyday of the Chicago Cubs championship run. As a judge, he became nationally famous for standing up to the richest man in the world, John D. Rockefeller. While he was beloved as a trust-busting judge, Landis was also a regular at West Side Grounds, home of the Chicago Cubs. He openly rooted for the Cubs against the White Sox in the 1906 World Series, something White Sox fans never forgot. When the Cubs moved to what is now Wrigley Field, he was a regular there as well. He loved baseball and watched it intently, leaning forward in his seat, devouring every moment of the game.

During World War 1, Judge Landis became even more popular with the general public. A fervently patriotic nation cheered the judge who threw the book at anyone who dared speak ill of his country (which was against the law at that time, thanks to the Espionage Act of 1917 and the Sedition Act of 1918). It was during this era, however, that gamblers began to take over Landis’ beloved game of baseball. With horse racing banned by President Wilson during the war, the gamblers shifted their attention to another sport–the national pastime. Rumors swirled during the 1918 Series (which featured Landis’Cubs), and then reached a fever pitch during the 1919 Series between the White Sox and the Reds. When a Cubs player (Claude Hendrix) was accused of sports betting on another game in the 1920 season, baseball owners knew something had to be done. The idea of naming Landis Commissioner of baseball actually came from one of the minority owners of the Cubs, Albert Lasker. He was an advertising mogul in Chicago who realized that the game would be forever tainted if it didn’t act. Who better to save the game than the man who stood up to Rockefeller?

Landis accepted the job and became as tough on players who gambled as he had been on Americans disloyal to the War. After his harsh punishments against the White Sox players (and several other players in the following years), rumors of game-fixing virtually disappeared from the game. While a sport like boxing (which was just as popular back in those days) slipped into an underworld morass, baseball emerged more popular than ever. The credit for that goes to a Cubs fan…Judge Kenesaw Mountain Landis.

~Sam Fuld 1981 (Cubs 2007-2010)
Sam was a crowd favorite in his limited playing time with the Cubs, mainly because of his take-no-prisoners style of outfield defense. The fans loved the way he flung himself toward the ball. He wasn’t a bad hitter either. In his longest stretch of playing time in 2009, Fuld hit .299. It was enough to attract the attention of the Rays, who asked for Sam to be included in the trade package that brought Matt Garza to the Cubs. Fuld has since also played for Oakland and Minnesota. He has stolen more than 20 bases in a season twice since he left Chicago.

~Jay Johnstone (Cubs 1982-1984)
Johnstone had a tremendously successful big league career. He played 20 years in the majors and won two World Championships (1978 Yankees and 1981 Dodgers). His best seasons were probably with the Philadelphia Phillies teams in the mid-70s. By the time he came to the Cubs in 1982, he was more of a part-time player, but Johnstone was still productive. He was also the life of the party. His teammates loved him because he was such a jokester. Here’s an example…

~Alex Arias 1967 (Cubs 1992)
Arias was drafted by the Cubs and played a little shortstop for them in his rookie season on 1992, but after the season was over, he was included in the package that brought Greg Hibbard to the Cubs from the Marlins. Hibbard had one good season in Chicago, and Arias went on to become a World Series champion. In eleven seasons, Alex played for five different big league clubs. 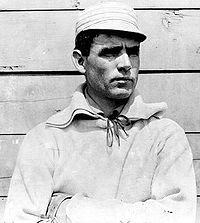 ~Clark Griffith 1869 (1893-1900)
They called him the Old Fox. When he was with the Cubs (then known as the White Stockings), he wasn’t old yet, and he wasn’t a fox, but he did have his best years wearing the uniform of Chicago’s National League ballclub. Clark Griffith joined what was to become known as the Cubs the same year as the Columbian Exposition. The Old Fox’s career was just beginning, but starting in 1894 he won 20 games for the Cubs six years in a row. He went on to manage in the majors for twenty years, including twelve years as a player/manager (although not for the Cubs). He led the White Sox to the American League pennant in 1901, and spent the last nine years of his career managing the Washington Senators. Griffith became the owner of the Senators in 1920, and ran the club until his death in 1955. The highlight of those years was probably the 1924 World Series, won by the Senators over the New York Giants. (President Calvin Coolidge attended that series.) The stadium in Washington was named after him, and he was elected into the Hall of Fame in 1946. His son Calvin Griffith, took over the team after his father’s death and moved them to Minnesota in 1961, where they still play today as the Minnesota Twins.

~Jess Dobernic 1917 (Cubs 1948-1949)
Like many of his contemporaries, Jess lost a few key years of his baseball career to the war. It took him two full seasons to return to big league form, but he finally joined the Cubs in 1948. He had an excellent season that year, pitching in 54 games. He won 7 games, saved another, and posted a very respectable ERA of 3.15. The next season was a different story, unfortunately. Jess was rocked in his four appearances and was traded to the Reds.

~Laurie Reis 1858 (Cubs 1877-1878)
Laurie was short for Laurence. The native Chicagoan pitched eight games for the Cubs (then known as the White Stockings) over two seasons, and all eight of them were complete games. To say he pitched in a different era is an understatement. Laurie gave up 42 runs in those eight starts, but only 16 of them were earned. 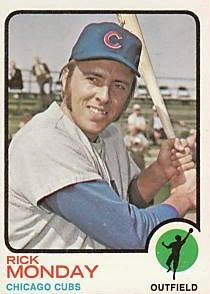 ~Rick Monday 1945 (Cubs 1972-1976)
Monday was a key member of the Cubs during the early-to-mid 70s. The former first overall pick in the draft cost the Cubs Kenny Holtzman to acquire him, but he was a rare combination of power and speed during his Cubs years, averaging over 20 homers a season out of the leadoff spot. But that’s not why he is remembered as a Cub. He’s remembered for one particular day. He was patroling centerfield for the Cubs against the Los Angeles Dodgers in Dodgers stadium on April 25, 1976 when two protesters came out on the field with an American flag, some lighter fluid, and some matches. Their plan was to set the American flag on fire. Their mistake was to do it within running distance of former United States Marine Reservist Rick Monday. While they were trying to set it on fire, Monday ran up to them and snatched the flag away just in time. Rick then ran it all the way over to the dugout to protect it. The crowd erupted into a spontaneous singing of the song “God Bless America,” the protestors were arrested and escorted out of the ballpark, and the next time Monday came up to bat—and mind you this was in an opposing team’s ballpark, the scoreboard flashed the following message to him: “Rick Monday…you made a great play.” The following year the Dodgers acquired Monday in the trade that brought Bill Buckner and Ivan DeJesus to the Cubs. (Photo: Topps 1973 Baseball Card)