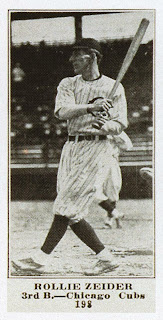 ~Rollie Zeider 1883–1967 (Cubs 1916-1918)
He remains one of only two men to have played for three different professional teams in Chicago (he played with the Cubs, the Sox, and the Federal League Whales). His last three seasons in the big leagues were spent with the Cubs, serving as their utility man. Zeider played every position on the field except catcher, pitcher, and center field. Rollie’s time with the Cubs coincided with the first three years the team played at what is now known as Wrigley Field (1916-1918). Once called “Hook” because of his beak-like nose, Zeider later became known as “Bunions” when he contracted blood poisoning after a Ty Cobb spiking sliced into his bunion.

~Chris Haney 1968– (Cubs 1998)
Haney was a left-handed pitcher who managed to pitch for five different teams (Expos, Royals, Indians, Red Sox, Cubs) over an eleven-year big league career despite posting a career ERA over five. He appeared in five games for the Cubs, covering five innings, and managed to give up two homers. His ERA in Chicago was 7.20.

~Harry Chiti 1932–2002 (Cubs 1950-1956)
Harry was a backup catcher for the Cubs during most of his time in Chicago. He missed two full seasons (1953-1954) because he was serving in the military. Harry’s best season was 1955, when he hit 11 homers and caught over 100 games. He later also caught for Kansas City, Detroit, and the Mets (in their inaugural season). In 1962 Harry was traded for himself. The Indians traded him to the Mets for a player to be named later, and that player ended up being himself.

~Garth Mann 1915–1980 (Cubs 1944)
His nickname was Red, and Red appeared in exactly one major league game. On May 14, 1944, he came in to pinch run for Lou Novikoff, the Mad Russian. Mann later scored on an Andy Pafko single. The big Texan never got a chance to pitch (he was a pitcher) or hit in the big leagues. He played 11 seasons of minor league ball.

~Joe Quest 1852–1924 (White Stockings 1879-1882)
He was born during the Millard Filmore presidency. In his four seasons with the Cubs (then known as the White Stockings), Quest was the starting second baseman. Three of those years (1881-1883), they won the National League championship.

~Clay Bryant 1911–1999 (Cubs 1935-1940)
Bryant was a journeyman pitcher for the Cubs until he suddenly blossomed and won 19 games out of nowhere in 1938. He pitched well in the World Series that year against the Yankees, at least for 4 innings, before losing Game 3, 5-2. The Cubs were eventually swept in the series. Unfortunately for Bryant, he came crashing back to earth pretty quickly. He had arm problems in 1939 and missed most of the year. When he started out the 1940 season with arm problems (elbow) again, Cubs owner PK Wrigley suspended him indefinitely without pay. Bryant wanted to go to LA to have his arm treated, but he couldn’t afford to do it without a steady paycheck, so he protested the suspension to Commissioner Landis. Landis sided with Wrigley, and Wrigley refused to buckle on the suspension. He did, however, find a way to help Bryant without losing face. Wrigley eventually paid Bryant’s wife $50 a week for 4 weeks to accompany him to Los Angeles. Clay Bryant got his treatment, but it didn’t help. He never made it back to the majors.