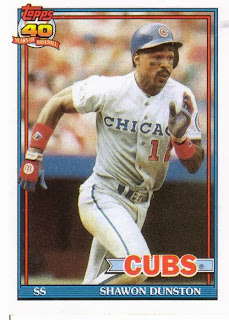 ~Shawon Dunston 1963– (Cubs 1985-1995, 1997)
Dunston was the first overall pick in the 1982 amateur draft, and had one of the greatest arms of any shortstop in baseball history. He was also a fan favorite (fans kept track of his batting average with the Shawon-O-Meter), and had a successful 17-year major league career. Although he didn’t have a “first pick in the draft” kind of career, Dunston was a two-time All Star with the Cubs (1988 & 1990). He finally got a chance to play in the World Series in his final big league season in 2002 (with the Giants). That team, led by Dusty Baker, choked away the championship to the Angels in the closing innings of Game 6, and then lost decisively in Game 7. (An eerie preview of what awaited the Cubs the following year.) Shawon’s son later played in the Cubs minor league system.
(Photo: Topps 1991 Baseball Card)

~Oscar Bielaski 1847–1911 (White Stockings 1875-1876)
Oscar was the right fielder of the Cubs (then known as the White Stockings) the season before the National League was founded, and also played with them in the National League’s first season (1876). Bielaski’s lifetime batting average was .240. His baseball career might not have amounted to much, but he holds a special distinction among players that have worn the Chicago uniform. A decade before joining the team, Oscar served in the 11th Calvary Regiment of New York in 1864. That’s right, Oscar was a Civil War veteran. He is buried in Arlington Cemetery in Washington. Shortly after he died in 1911, his nephew Alexander was named the director of the FBI. Oscar’s father was also a Captain in the Civil War and died in action.

~John Sullivan 1890–1966 (Cubs 1921)
Sullivan was an outfielder for the Cubs in 1921, and had a very good season as a bench player, hitting .329 in 250 at bats. But after the season was over, Sullivan was shipped off to the Pacific Coast League so that the Cubs could acquire West Coast minor league star, Jigger Statz. Sullivan played another five years of minor league ball, but never made it back to the big leagues.

~Jim Hughes 1923–2001 (Cubs 1956)
Jim was a career-long relief pitcher in a day when such a thing wasn’t nearly as common as it is today. Before coming to the Cubs, Hughes led the league in saves with the Brooklyn Dodgers. His 1956 Cubs team may have featured a burgeoning superstar in Ernie Banks, but their pitching staff was atrocious, including Hughes. He clearly no longer had whatever he had in Brooklyn. The Cubs finished in last place that year, while his former Brooklyn team finished in first.

~Owen Friend 1927–2007 (Cubs 1955-1956)
Owen played five seasons in the big leagues during the 1950s, the last two of which were with the Cubs. The backup infielder got a grand total of twelve trips to the plate in those two seasons, and struck out five times. Red, as he was called by his teammates, went on to play in the minor leagues until 1964.

~Len Church 1942–1988 (Cubs 1966)
Church pitched in the Cubs minor league system for nearly a decade, but the Lane Tech grad got only one cup of coffee with the big club in August and September of 1966. Church pitched out of the bullpen for the last place team, and it didn’t go well. In six innings, he walked seven men and gave up a long ball. His final big league ERA was 7.50.

~Bill Plummer 1947– (Cubs 1968)
Bill was a 21-year-old rookie catcher when he made the Cubs team in spring training of 1968 (as a Rule V pick), but he got almost no playing time during his month-long Cubs stay. He didn’t resurface in the big leagues until two years later, with the Reds. He became Johnny Bench’s backup there, and played in Cincinnati for eight seasons in that role. After retiring as a player, he became a manager. In 1992, he managed the Seattle Mariners, but the rest of his managing career (more than 20 years) was spent in the minor leagues, and the Venezuelan Winter League. 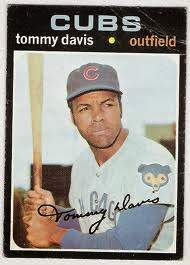 ~Tommy Davis 1939– (Cubs 1970 & 1972)
Tommy Davis had an outstanding eighteen year big league career. He was a two-time All-Star, two-time batting champ, and won a World Series ring with the Dodgers, but his two stints with the Cubs were short and uneventful. By the time he came to Chicago, Tommy was no longer the dynamic outfielder he had been earlier in his career. When the Cubs traded him to the Orioles in 1972, it led to his final career resurgence…as one of the very first designated hitters. Davis amassed over 2000 career hits and his lifetime batting average was a very impressive .294. (Photo: Topps 1971 Baseball Card)