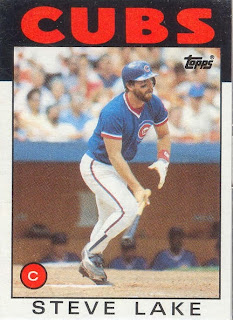 ~Steve Lake 1957– (Cubs 1983-1986, 1993)
Steve spent eleven years in the big leagues as a backup catcher, beginning and ending his career with the Cubs. He was known as a great defensive catcher. Lake ranks ninth on the all-time list for percentage of baserunners thrown out trying to steal. But Steve also wasn’t much of a hitter. In nearly 1200 lifetime at bats, he hit only eighteen homers, and batted only .237. Probably the highlight of his career came in 1987 as a member of the St. Louis Cardinals. He got the start behind the plate in the deciding Game 7 of the World Series versus the Twins. The Twins won the game, but Lake played well. He went 1 for 3, drove in a run, and threw out Kirby Puckett trying to steal third base. (Photo: Topps 1986 Baseball Card)

~Ty Waller 1957– (Cubs 1981-1982)
Waller arrived in Chicago as part of the Bruce Sutter/Leon Durham trade, along with fellow third baseman Ken Reitz. He started the ’81 season in the minors, but was called up in June to help an incredibly bad Cubs team. Waller became a pretty good pinch hitter and bench player the rest of the way. He got three homers and 13 RBI in limited at bats. The Cubs traded him to the White Sox in 1982 for pitcher Reggie Patterson, and Ty didn’t make it back up to the big leagues again until he got a limited shot with the 1987 Astros. He retired from baseball following that season.

~Bob Raudman 1942– (Cubs 1966-1967)
His Cubs teammates nicknamed him “Shorty” because Raudman was only 5’9″. He may have been short, but he was powerful. He hit 20 homers in the minors in 1966, which is the reason the Cubs called him up in September that year. They let him start eight games alongside Billy Williams and Adolpho Phillips, and Raudman performed pretty well. He made the opening day roster in 1967, but was sent down to the minors before the end of April. He came back up in September of that season for his last shot at the big leagues. Shorty hit only .154, and never made it back to the Cubs again. Despite his power in the minor leagues, Bob Raudman never managed to hit one out of the park in the majors. He became a professional motorcycle racer after his baseball days.