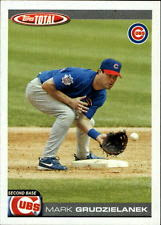 ~Mark Grudzielanek 1970– (Cubs 2003-2004)
Mark was an All-Star early in his career with the Expos and a Gold Glover at second base for the Royals late in his career, but he also made several other big league stops along the way, including Los Angeles, St. Louis, Cleveland, and of course, the Cubs. He was acquired in an excellent trade from the Dodgers that also brought Eric Karros to the team in exchange for Cubs albatross Todd Hundley. The two ex-Dodgers were key members of the Cubs team that won the division in 2003. Grudzielanek had one of the best seasons of his career, hitting .314 and providing veteran leadership to a team that came only five outs away from the World Series. The following season he got hurt, and left in free agency before the 2005 season. (Photo: Topps 2004 Baseball Card)

~Doug Dascenzo 1964– (Cubs 1988-1992)
Dascenzo was one of the best fielding outfielders in the National League during his time with the Cubs. He started his career with a then-record of 241 consecutive games without an error. Doug was an extra outfielder during the exciting Boys of Zimmer division champion season of 1989. He never really managed to claim a full-time starting position because his hitting was a little weak. His best hitting season with the Cubs was 1992, when he hit .255. While he was with the Cubs, he also pitched when they ran out of pitchers at the end of blowouts. He appeared in four games and didn’t allow a single run. Dascenzo returned to the Cubs as part of the coaching staff for the 2015 season.

~Paul Toth 1935–1999 (Cubs 1962-1964)
Toth is probably one of the most obscure pieces of the infamous Lou Brock trade. He went to the Cardinals along with Brock and Jack Spring. He never pitched in the big leagues for the Cardinals. His best year with the Cubs was 1962, when he won five games with a 3.10 ERA for an incredibly bad team.

~Joe Stephenson 1921–2001 (Cubs 1944)
Joe languished in the minor leagues for ten years, but did get a few very brief tastes of the big-time during World War II, including his very short stint with the Cubs. The catcher appeared in only four games and managed to get one hit in eight plate appearances. Stephenson’s baseball career is more notable for what he did after he retired as a player. He worked as a scout for the Red Sox and discovered the likes of Fred Lynn, Rick Burleson, Dwight Evans, and Bill “Spaceman” Lee.

~Johnny Hudson 1912–1970 (Cubs 1941)
Hudson was a backup infielder who played seven seasons in the big leagues, but remained in the game for the rest of his life (mostly as a scout for the Giants). He was dubbed “Mr. Chips” by Dodgers broadcaster Red Smith because the movie Mr. Chips was popular at the time, and Johnny always seemed to come through when the chips were down. He came to the Cubs in the historically bad trade that sent Hall of Famer Billy Herman to the Dodgers. Hudson didn’t do much in Chicago. He hit .202, while Herman led the Dodgers to the pennant.

~Jocko Flynn 1864–1907 (White Stockings 1886-1887)
Jocko pitched only one season with the Cubs (then known as the White Stockings) in 1886 and won 23 games, but he was a small man (5’6″, 143 pounds) with a very large appetite for booze. He blew out his arm and became a full-fledged alcoholic. Jocko died shortly after his 43rd birthday. He still holds the record for most wins by a pitcher who only pitched one season in the big leagues (23). 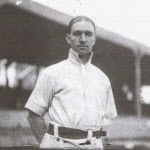 ~Davy Jones 1880–1972 (Orphans/Cubs 1902-1904)
Nicknamed “Kangaroo” by his teammates, Jones was one of the colorful characters of his era. His best season with the Cubs was 1903 when he hit .282 and drove in 62 runs as the starting center fielder. The rest of his Cubs career, he was plagued with injuries and illnesses. He contracted typhoid one year and broke his leg another year. After leaving Chicago he played for the Tigers against the Cubs in the 1907 and 1908 World Series. His last game as a big leaguer was one of the most unusual finales of all-time. He was attending the game as a fan in 1918 when his old teammates asked him to come out and play. So he did. The ball is in the baseball Hall of Fame. It says: “Last ball used in game at Navin Field in last game of season, 1918, caught by Davy Jones. Hit by Shano Collins of the Chicago White Sox. Season ending on Labor Day on account of War.”