Historical Events (April 24–April 30): Where were the Cubs? 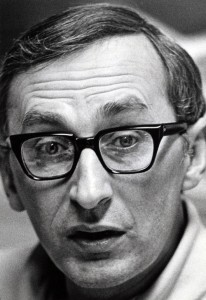 Few Chicagoans were more closely associated with the Chicago Cubs than Mike Royko. As a columnist for the Daily News, The Chicago Sun Times, and the Chicago Tribune, he often wrote about his favorite team; bleeding Cubbie blue right onto the page. Other than a brief period when he became a Sox fan to protest the grotesque buffoonery of Dave Kingman, (one year–1980–he swore his allegiance on Bill Veeck’s wooden leg), Mike Royko was a Cubs fan from cradle to grave.

On October 25, 1972, the day that Jackie Robinson died, Royko recalled witnessing Jackie’s first game at Wrigley Field. He was merely a boy then, but his recollections were chilling. Here’s a brief taste of that column…

“Robinson played first, and early in the game a Cub star hit a grounder and it was a close play. Just before the Cub reached first, he swerved to his left. And as he got to the bag, he seemed to slam his foot down hard at Robinson’s foot. It was obvious to everyone that he was trying to run into him or spike him. Robinson took the throw and got clear at the last instant. I was shocked. That Cub, a hometown boy, was my biggest hero.”

But Royko also got a souvenir that day…

“Late in the game, Robinson was up again, and he hit another foul ball. This time it came into the stands low and fast, in our direction. Somebody in the seats grabbed for it, but it caromed off his hand and kept coming. There was a flurry of arms as the ball kept bouncing, and suddenly it was between me and my pal. We both grabbed. I had a baseball.”

“New York didn’t need that 1969 pennant…all Cub fans wanted was that one measly pennant. It would have kept us happy until the twenty-first century. But New York took that from us and I can never forgive that.”

In 1984, when the Cubs needed to win only one more game in San Diego to clinch their first pennant since World War II, Royko taunted the Padres and their fans in his column. Needless to say, that didn’t work out so well. Yet he remained a die-hard fan. After Chicago Cubs announcer Harry Caray had a heart attack in the late 1980s, Rokyo took a turn in the team’s booth as guest announcer. He constantly tracked the team and everything associated with them. Just prior to the 1990 World Series he wrote about the findings of another fan, Ron Berler, who had discovered a correlation called the “Ex-Cubs Factor”. He predicted that the heavily-favored Oakland Athletics would lose the Series to the Cincinnati Reds. The accuracy of that unlikely prediction, in stunning fashion (four game sweep) propelled the Ex-Cubs Factor theory into the spotlight. Royko is often associated with that theory because he helped popularize it. (By the way, it was proven incorrect by the 2001 Arizona Diamondbacks)

Toward the end of his life, Royko was asked to explain what it is to be a Cubs fan. This is what he said…
His last column in the Chicago Tribune appeared in March 1997, a month before his death.

His memorial service is held at the only fitting place for such an event; a sunny day in Wrigley Field.

April 24, 1982. Jane Fonda releases her first workout video. Fergie Jenkins leaves with the lead at Wrigley Field, but the Cubs and their rookie third baseman Ryne Sandberg lose to the Pirates 8-5.

April 25, 1917. Ella Fitzgerald is born in Virginia. Hippo Vaughn and the Cubs beat the Reds 4-2 in Cincinnati.

April 27, 1963. High school freshman Little Peggy March hits #1 with her song “I Will Follow Him”. Larry Jackson and the Cubs beat the Phillies 4-2 at Wrigley Field. Ron Santo knocks in the go-ahead run.

April 28, 1967. Muhammad Ali refuses induction into the military. The Astros beat the Cubs in the Astrodome in the bottom of the 13th inning. Joe Niekro gives up the winning run.

April 29, 1945. Adolf Hitler marries Eva Braun in his bunker. The Cubs lose a double header to the Pirates at Wrigley Field.

April 30, 1933. Willie Nelson is born. The Cubs split a double header against the Cardinals at Wrigley Field. Charlie Root wins the opener in a shutout, and the recently fired (by the Cubs) Rogers Hornsby hits a homer for the Cardinals to win the second game.