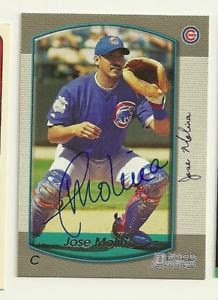 ~José Molina 1975– (Cubs 1999)
Yes, that’s right, the Cubs had a Molina. José was the middle brother of the big league catcher brother trio. He is a year younger than Bengie and seven years older than Yadier. José had a couple of career highlights, including winning a World Series with the Angels in 2002 and the Yankees in 2009, and hitting the last-ever homer at old Yankees Stadium. But he only had 21 plate appearances in a Cubs uniform, and was released by the team in 2000. The Cubs really called that one. He only played another 14 seasons in the big leagues. (Photo: 2000 Bowman Baseball Card)

~Steve Smyth 1978– (Cubs 2002)
Steve was a highly regarded prospect in the Cubs farm system who was brought in as one of the desperate attempts at finding a fifth starter in 2002. He got seven starts and pitched a grand total of 26 innings. Do the math. He didn’t even average four innings a start. It was his only shot at the big leagues. The Cubs traded him to Atlanta in 2004. Smyth pitched in the minor leagues for ten full seasons.

~Robert Machado 1973– (Cubs 2001-2002)
Machado had a very respectable nine-year big league career as a backup catcher, including two seasons with the Cubs (2001-2002). He backed up Todd Hundley and Joe Girardi. Machado also played for the White Sox, Expos, Mariners, Brewers, and Orioles.

~Munenori Kawasaki 1981– (Cubs 2016)
The energetic Japanese infielder was 35 years old when the Cubs signed him to help provide backup infield help. Kawasaki had a great career in Japan, and was coming off a solid season with the Blue Jays. He made the Cubs roster out of spring training, but spent most of the season with Iowa. He returned after the rosters expanded in September. Kawasaki was a popular teammate thanks to his enthusiasm. The Cubs granted him free agency after the season.

~John Dobbs 1875–1934 (Cubs 1902-1903)
Dobbs hit over .300 as the Cubs starting center fielder the last half of the 1902 season, but when he slumped at the beginning of 1903, they cut him loose. He later played with Brooklyn. After his playing career ended Dobbs went into coaching. He managed in the minor leagues until the year before his death.