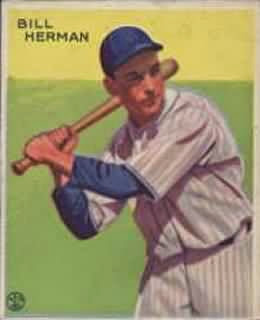 ~Billy Herman 1909–1992 (Cubs 1931-1941)
He was named William Jennings Bryan Herman after the famed orator, and this Billy had an incredible big league career. He was a 10-time All-Star in 15 big league seasons (and his first two years, the All-Star game hadn’t been invented yet). He was considered the best hit and run man to ever play the game. His lifetime batting average was .304. He led the league in hits, doubles, triples, and sacrifices, but he was even better known for his glove. In his 15 years as a second baseman he led the league in putouts seven times, not to mention leading the league in assists, fielding percentage, and range. And he was elected into baseball’s Hall of Fame in 1975. But sadly, Herman didn’t spend his entire career with the Cubs. The team somehow traded him to the Dodgers in 1941. Leo Durocher, the Dodgers manager at the time, tells how this happened in his book Nice Guys Finish Last. He was traded to the Dodgers at four in the morning. According to Durocher, who got this information directly from his GM (MacPhail), the trade was made during a night of drinking. MacPhail was invited to the suite of the Cubs GM Jim Gallagher when the Cubs were in New York. MacPhail was a well-known drunk, but he figured out pretty quickly that Gallagher and manager Jimmy Wilson were trying to get him drunk to talk trade. So, instead of drinking the brandy, MacPhail only pretended to drink it while he was actually pouring it out in flower pots, toilet bowls, and wherever else he could. Meanwhile, every time the Cubs poured MacPhail a drink, they also poured themselves one. Instead of getting him drunk, they got themselves drunk. By 4 AM MacPhail had acquired the best second baseman in baseball in exchange for a backup outfielder and a utility infielder. The deal was put in writing on the back of an envelope. And yes, MacPhail’s grandson later became the president and general manager of the Cubs: the infamous Andy MacPhail.

~George Moriarty 1885–1964 (Cubs 1903-1904)
Moriarty was just a local Chicago kid from the Back of the Yards when he got a one-game tryout at the end of the 1903 season with the Cubs. He went 0 for 5 and was visibly nervous, but the Cubs invited him to join the team the following year. He played another four games in 1904 before being shipped out. After he left the Cubs, however, Moriarty made his mark in the big leagues. His best stint was with the Detroit Tigers. He was their third baseman for five seasons, and displayed a terrific glove, leading the league in fielding percentage and assists. George was a fierce competitor on the field…but he was known for his friendly personality off the field. His brother Bill played briefly for the Reds.

~Willard Mains 1868–1923 (White Stockings 1888)
His teammates nicknamed the youngster “Grasshopper” when he pitched for the Cubs (then known as the White Stockings) because he was only 20 years old. He went 1-1 in his two starts. His son Jim pitched in the big leagues as a 21-year-old in 1943. Needless to say, Willard was an older father. Father and son’s big league debuts were 55 years apart.