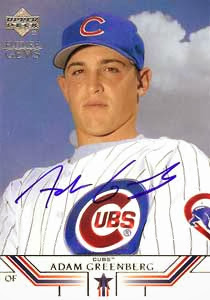 Adam Greenberg 1981– (Cubs 2005)
His Cubs career was undeniably unique. On July 9, 2005, the Chicago Cubs called him up to the big leagues. They were in Miami facing the Florida Marlins. Greenberg’s entire family flew down to Florida from Connecticut to watch his first major league series. They could barely contain their excitement in the 7th inning of the game, when Adam was called on to pinch hit for Cubs pitcher Will Ohman. The pitcher was Valerio De Los Santos, a left-hander. “I get in the box,” Greenberg remembers, “and all of a sudden he throws it, and I’m thinking, ‘Am I swinging?’ and all of a sudden, bam.”

Here’s the way New York Times reporter Ira Berkow described the only pitch of Greenberg’s major league career: “No one imagined that the very first pitch the left-handed Greenberg faced in the major leagues would be a fastball that would crack him squarely in the head, smashing against his helmet and the part of his neck just under his right ear, making a sound so loud that it stunned the crowd of almost 23,000. His parents, his sister and two brothers had come to Dolphins Stadium from Guilford, Conn., near New Haven. His grandfather was watching at home on television. His mother, Wendy Greenberg, said she was horrified when she saw her son drop to the ground as Cubs Manager Dusty Baker and the trainer rushed to the plate.”

Greenberg had to be removed from the game and was placed on the disabled list after the game. He never returned to the Cubs, and never returned to the majors until the Marlins gave him one at bat at the end of the 2012 season as a publicity stunt. He struck out. (Photo: 2002 Upper Deck Future Gems Baseball Card)

~Joe Hughes 1880–1951 (Orphans 1902)
His cup of coffee in the big leagues was only slightly longer than Adam Greenberg’s. Hughes played in exactly one game, on August 30, 1902 in Pittsburgh. He played right field and got three at bats (no hits) for the Orphans (Cubs) that day. The Cubs lost in the bottom of the 12th inning, 3-2.

~Tsuyoshi Wada 1981– (Cubs 2014-2015)
He was a 33-year-old rookie when he came up to the big leagues after an impressive season in Iowa, but Wada had lots of experience in his native Japan. Dr. K, as he is known, pitched well for the Cubs in 13 starts. In 2015 he hurt his arm and only appeared in eight games.

~Ted Savage 1936– (Cubs 1967-1968)
Savage played for eight teams in the big leagues, including the Cubs. He was a fourth outfielder type, who never really claimed a full-time position. With the Cubs he hit .218 in 1967. They traded him early in 1968 and it turned out to be a great trade. In exchange for Savage and Jim Ellis, the Dodgers sent the Cubs Jim Hickman and Phil Regan. Both players were key contributors to the Cubs over the next few years.

~William Petersen 1953– (Cubs fan 1953-present)
He was born in Evanston, Illinois in 1953 and grew up a Cubs fan. The Cubs of his youth were some of the worst teams imaginable, yet Wrigley Field was always one of his favorite destinations. But he didn’t just watch the Cubs there, he also watched the Bears. When he was 9 years old his dad took him to a bar to watch the 1963 Championship game. “Hey! The game was blacked-out in Chicago,” he explained. “We had to watch it somewhere. It’s one of my favorite childhood memories.”

After college he performed with the Steppenwolf Theatre Company and was a co-founder of the Remains Theater Ensemble which also included other prominent Chicago actors Gary Cole and Ted Levine. And he attended Cubs games. His big break in the movies came in 1986 in the film “To Live and Die in LA.” He continued working in films (“Manhunter,” “Young Guns II”) and television mini-series like “The Kennedy’s” and “Lonesome Dove,” but he really hit the jackpot in 2000 with his starring role (he was the producer as well) in the mega-hit TV show “CSI.”

But even during those heady Hollywood days, he longed for Chicago. “Oh God, I don’t know how long I can stick with this,” he said. “I’d be in Chicago right now if it wasn’t for this show. L.A.’s not my style. Just the other day, I had some friends in from Chicago and we went to see the Cubs beat the Dodgers out here. I was telling them there’s no community here. You can’t walk across the street from the stadium to the bar. I think that’s a microcosm for the whole city.” He still comes back to Chicago at least once a year to sing “Take Me Out to the Ballgame” at Wrigley Field.