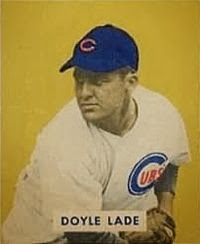 ~Doyle Lade 1921–2000 (Cubs 1946-1950)
The Cubs got him from the White Sox during the 1946 season, and Doyle stayed with the Cubs the rest of the decade. His best season was 1947. He won 11 games and posted a 3.94 ERA pitching for a less-than-stellar Cubs team. After that season, he was mostly used as a spot starter until his release in spring training 1951. Lade was a farm boy from Nebraska, and his teammates called him Porky. (Photo: 1949 Bowman Baseball Card)

~Pat Pieper 1886–1974 (Cubs P.A. announcer/1916-1974)
He was known for his trademark opener…”Tention! Attention Please! Get your pencils and scorecards ready and I will give you the correct lineups for today’s game.” He got the job in 1916 when the Cubs first started playing in what is now known as Wrigley Field, and he kept the job until his death in 1974–an incredible streak of 59 years. When he first began, he had to do his job with a gigantic megaphone (this was before a public address system had been invented.) He said the starting lineups to the crowd from third base, and then did the same thing on the other side of the field from first base. In 1932, the Cubs finally installed a public address system. Pieper was the PA for 6 World Series, but he also handled those chores for the twenty consecutive seasons the Cubs finished in the bottom half of the league (1946-1966). When he died shortly after the 1974 season (October 22nd), the Cubs had just finished their most successful stretch since their World Series days.

~Mike Campbell 1964– (Cubs 1996)
After stops in Seattle, Texas and San Diego, Campbell came to the Cubs in 1996 and had his best season in the big leagues. He went 3-1 with a 4.46 ERA. He went to Japan after that and developed shoulder problems. Campbell’s claim to fame was being part of the trade that brought Randy Johnson to the Mariners. He and Mark Langston went to the Expos in exchange for the future 300 game winner.

~Scott Williamson 1976– (Cubs 2005-2006)
The former Rookie of the Year, All Star, and World Series champ was coming off arm problems when the Cubs took a flier on him in early 2005. He was supposed to be the team’s closer, but Ryan Dempster took over that role instead, and Wililamson struggled to regain his velocity. The Cubs traded him the following season to the Padres.

~Cody Ransom 1976– (Cubs 2013)
He had played for the Giants, Astros, Yankees, Phillies, Diamondbacks, Brewers and Padres before he came to the Cubs in 2013. Cody was the very definition of the well-travelled journeyman. He had good few months in Chicago hitting nine homers in only 158 at bats, before slumping and being released just before the season ended.