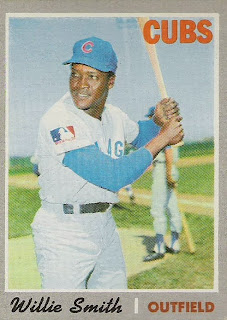 ~Willie Smith 1939–2006 (Cubs 1968-1970)
Willie’s greatest day as a Cub happened on April 8, 1969. He hit a pinch-hit 2-run walk off home run to win the game on Opening Day. That began a year long love affair between the Cubs and their fans. On September 4, 1969, with the Cubs still holding onto a 5-game lead over the Mets, Willie and teammate Nate Oliver released a parody of the Righteous Brothers hit “You’ve Lost that Lovin’ Feeling”. Unfortunately for Willie, Nate and Cubs nation, they weren’t “going, going, going, all the way” like the song predicted.

~Hal Rice 1924–1997 (Cubs 1954)
Hal’s nickname was “Hoot” and he was an outfielder and pinch hitter for seven big league seasons, including his last one with the Cubs. He was probably best known as Stan Musial’s backup in St. Louis, and as you might imagine, didn’t get a lot of playing time in that capacity. The Cubs brought him aboard to pinch hit, but when you hit only .153, it’s usually enough to end your career. That’s what happened to “Hoot” in Chicago.

~Chris Kitsos 1928–2004 (Cubs 1954)
Some players a cup of coffee in the show. Chris Kitsos only got a sip. He was a switch-hitting shortstop, but he languished in the minor leagues until April 21, 1954. On that day he finally got the call from the big club and was inserted as a defensive replacement for shortstop Eddie Miksis in the bottom of the eighth inning against the Braves in Milwaukee. Two of the Braves batters hit grounders to him, and he retired them both, including future Hall of Famer Warren Spahn. But he didn’t get a chance to bat in the top of the ninth inning, and he never appeared in another big league game.

~Tom Veryzer 1953–2014 (Cubs 1983-1984)
In many ways Veryzer was the prototypical journeyman infielder, but he did have a few career highlights. He broke up a Ken Holtzman no-hitter with two outs in the ninth inning, and was named to the All-Rookie team as a Detroit Tiger in 1975. With the Cubs he was a backup to both Ryne Sandberg and Larry Bowa during their ill-fated 1984 season. He made the post-season roster and got into a few of the games as a late-game defensive replacement. That was his last hurrah in the big leagues.

~Dave Swartzbaugh 1968– (Cubs 1995-1997)
The Cubs used him as a spot starter his last two seasons, but it didn’t turn out so well. He started seven games and didn’t win a single one of them.

~Brian Matusz 1987– (Cubs 2016)
The Cubs were in the midst of a tremendous winning streak after the 2016 All Star break but they needed a pitcher to come up for a spot start. The way the team was going, it appeared that just about anyone could have come up and pitched the team to victory. Not true. Matusz was rocked. He never got another chance to pitch for the Cubs. The former #1 draft pick of the Orioles ended the season in the minors. His Cubs ERA stands at 18.00.