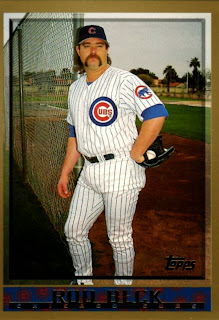 ~Rod Beck 1968–2007 (Cubs 1998-1999)
They called him “The Shooter” because he was like a gunslinger out there, and he didn’t waste any of his bullets. Rod Beck was the Cubs closer during the Wild Card season of 1998, saving 51 games in truly scary fashion. By the time he arrived with the Cubs, he was throwing junk — his fastball was in the mid-80s at the very best — but he somehow still got the outs. Without him, they wouldn’t have made the playoffs that year. Cubs fans embraced him and his blue collar attitude. But after more arm problems the following year, he was traded to the Boston Red Sox. He managed to stay in the majors until 2004, and had a few more good seasons in Boston and San Diego, but he died tragically in 2007 from an apparent drug overdose. He was only 38 years old.
(Photo: Topps 1998 Baseball Card)

~Felix Sanchez 1981– (Cubs 2003)
The young Dominican reliever was only 22 when he was called up to the big leagues in September of 2003. Unfortunately for Felix, the Cubs were in a pennant race, and couldn’t afford to take too many chances. He pitched in three games, and had an ERA of over 10. That turned out to be his only shot at the big-time. The Cubs traded him to Detroit the following April, and he never made it up to the Tigers big league team.

~Roosevelt Brown 1975– (Cubs 1999-2002)
Roosevelt was on the Cubs for three seasons strictly as a backup outfielder and pinch hitter, and he showed flashes of promise. They finally played him more extensively in the 2002 season to see what he could do (as an injury replacement for Moises Alou), and Brown didn’t seize the opportunity. In over 200 plate appearances, he batted only .211. The Cubs released him after the season, and he never made it back up to the big leagues.

~Jim Hegan 1920–1984 (Cubs 1960)
Hegan was a five-time All-Star catcher for the Cleveland Indians, including their World Series championship year of 1948. Shanty, as he was nicknamed, was never a great hitter (lifetime .228 in 17 big league seasons), but he was one of the best defensive catchers of his era. He played his final season in the big leagues in Chicago for his old Indians manager, Lou Boudreau. The 39-year-old was one of eight catchers for the Cubs that year. After his playing career ended, Hegan went into coaching and scouting for the New York Yankees, mentoring the likes of Thurman Munson and Rick Dempsey. Hegan’s son Mike also played in the big leagues and was himself an All-Star first baseman for the Seattle Pilots.

~Al Kaiser 1886–1969 (Cubs 1911)
Kaiser had one of the great nicknames — they called him Deerfoot. The outfielder reached base fewer than thirty times with the Cubs, but he still managed to steal six bases. Unfortunately, he couldn’t steal first base. His career batting average was only .216. He later played for the Boston Braves, and finished his career in the Federal League. 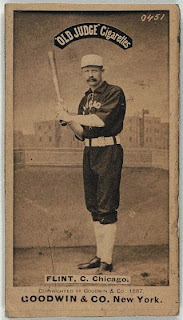 ~Silver Flint 1855–1892 (White Stockings 1879-1889)
Flint was a catcher on those early Cubs (then known as White Stockings) championship teams of the 1880s, and he also was the player/manager briefly in his first season with the club. Flint was a tough cookie who played hard on and off the field. On the field he caught the first four no-hitters in franchise history (three by Larry Corcoran, and one by HOFer John Clarkson). Off the field, he enjoyed his beverages. Flint died of tuberculosis in 1892 at the age of 36, only two years after his playing career ended.