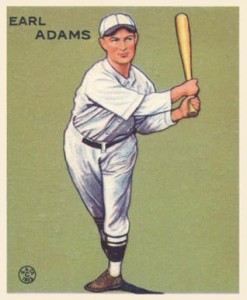 ~Sparky Adams 1894–1989 (Cubs 1923-1927)
His real name was Earl John Adams, and he was an energetic little guy; only 5’5″. Adams spent 1923 and 1924 as the Cubs’ semi-regular shortstop, but came into his own when he was switched to second base after George Grantham was traded to Pittsburgh for shortstop Rabbit Maranville. Sparky was the Cubs leadoff batter during those years and led the league in at-bats, but his real long-term value to the Cubs may have been as trade bait. Pittsburgh sent Kiki Cuyler to the Cubs for Adams and Pete Scott in 1927. Cuyler led the Cubs to two National League pennants (1929 & 1932) and is enshrined in the Hall of Fame.

~Heinz Becker 1915–1991 (Cubs 1943-1946)
Becker had problems with his feet during his playing career, which is how he got the nickname Bunions. Born in Berlin, Germany in the midst of World War I, Becker got his chance to play in the big leagues because so many players were World War II draftees. Bunions spent most of his short career as a backup, but he did help the Cubs win the National League Pennant in 1945. He played in three games of the World Series against the Detroit Tigers, singling and walking in three at-bats. The Cubs traded him to the Indians the following spring.

~Brendan Harris 1980– (Cubs 2004)
Harris made his big league debut for the Cubs on July 6th of 2004, but before the month was over he was involved in a big trade. Harris was one of the players in the Nomar Garciaparra trade. Harris was a utility infielder in the big leagues for eight seasons with the Expos, Nationals, Reds, Rays, Twins, and Angels.

~Tom Poholsky 1929–2001 (Cubs 1957)
Poholsky pitched in the big leagues with the Cardinals for several seasons before the Cubs acquired him in 1957. He had a very bad year in Chicago, winning only one game and losing seven, with an ERA of nearly five. It was the last gasp of his time in the big leagues. For his career, Poholsky was more than 20 games under .500.

~Xavier Cedeno 1986– (Cubs 2019)
The Cubs signed the veteran reliever as a free agent after stints with Houston, Washington, Tampa, Milwaukee, and the White Sox. He appeared in five games in May before getting hurt. He finished the season on the 60-day injured list.

~Chick Fraser 1873–1940 (Cubs 1907-1909)
Chick was the old-timer on the pitching staff of the first two Cubs World Series champion teams. He turned 35 during the 1908 season. He once no-hit the Cubs (1903) while pitching for the Phillies. Fraser was a headhunter and is still 5th on the all-time hit batsmen list behind Walter Johnson, Eddie Plank, Randy Johnson, and Joe McGinnity. Fraser was summarily fired from the team in 1909 by Frank Chance, after Chance sent him home to Chicago to get his arm ready for a series. When Frank discovered Chick hadn’t shown up at the ballpark at all, that was the end of his big league career.