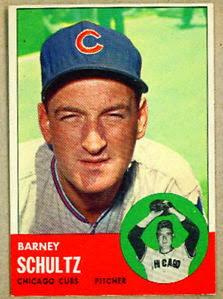 ~Barney Schultz 1926–2015 (Cubs 1961-1963)
Barney had the misfortune of pitching for the Cubs during the College of Coaches era. He was not a young pup either. The journeyman who had never spent a full season in the majors was 34 years old in 1961. His teammates called him “Mr. Old Folks.” The Cubs used him pretty extensively out of the bullpen that year (41 appearances), and even more the following year. The Cubs traded the knuckleballer to the Cardinals in 1963, and Barney went on to become a key member of the 1964 World Series champs (although he did give up a gargantuan homer to Mickey Mantle in his only pitch at Yankee Stadium). After his playing career ended, Schultz became a pitching coach for the Cardinals and the Cubs. (Photo: Topps 1963 Baseball Card)

~Roberto Novoa 1979– (Cubs 2005-2006)
The Cubs acquired Roberto in the trade that sent Kyle Farnsworth to the Detroit Tigers. Novoa was a right-handed relief pitcher who was used pretty frequently by manager Dusty Baker in 2005 and 2006 (over 100 appearances). He was a big man with a lively arm, but he allowed too many baserunners to be effective in late inning situations. In his last season with the Cubs he also had trouble with the long ball. In 76 innings, he gave up 15 dingers. That turned out to be his last season in the big leagues as well. He hurt his shoulder in 2007.

~Ramon Morel 1974– (Cubs 1997)
Morel appeared in three games for the Cubs at the end of the 1997 season. The right-handed Dominican reliever must have liked the number three. In those three games he pitched three innings, gave up three hits, walked three batters, and struck out three more. Guess what number he wore with the Cubs? 33.

~Elmer Foster 1861–1946 (Colts 1890-1891)
Foster was a backup outfielder with the Cubs (then known as the Colts) in the early 1890s. In his first season in Chicago he was a big help off the bench. He slugged five homers and stole 18 bases in only 27 games. Unfortunately for Elmer, he fell out of favor with the Cubs brass early the following season and was released. It was his last shot at the big leagues.

~Jeff Huson 1964– (Cubs 2000)
Huson managed to stay in the big leagues for twelve seasons, largely thanks to his reliable glove. The backup infielder (2B, SS, 3B) played for the Expos, Rangers, Orioles, Brewers, Mariners, Angels, and Cubs in parts of three different decades. The Cubs were his last stop. Among his career highlights: playing in Cal Ripken’s record setting game in 1995, and Nolan Ryan’s 7th no-hitter.

~Seth Morehead 1934–2006 (Cubs 1959-1960)
Moe, as he was called by his teammates, was a lefty reliever for some pretty bad Cubs teams. His record reflects that. During his time with the Cubs, he was 2-10. He also pitched for the Phillies and Braves during his big league career. After he retired from baseball, he went into banking.

~Cecil Garriot 1916–1990 (Cubs 1946)
Cecil’s only shot in the big leagues came as a September call-up for the Cubs in 1946. He batted six times — always as a pinch hitter — and didn’t get a hit. He was hit by a pitch in one of those at-bats, however, and scored his only big league run. Cecil played 16 seasons in the minors. He served in the Army during World War II.

~Ted Pawelek 1919–1964 (Cubs 1946)
They called him Porky, and the Chicago Heights native and former U.S. Marine played in exactly four games with the Cubs. The catcher’s only career hit came in his last at-bat with the Cubs on September 26, 1946. Porky doubled off Pirates pitcher Jack Hallet in a 5-3 Cubs win at Wrigley Field. After his playing career he became a scout with the Detroit Tigers. He died in an automobile accident at the age of 44.

~Les Sweetland 1901–1974 (Cubs 1931)
Les was a starting pitcher for the Cubs in 1931. In that hitter-friendly year he won 8 games, completed 9, and posted an ERA of 5.04. That was his last taste of the big leagues. He previously pitched for the Philadelphia Phillies for four seasons.