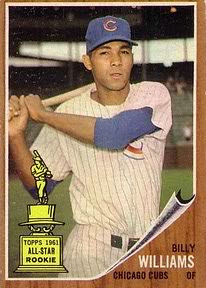 July 30,1962
The All-Stars gather in Chicago’s Wrigley Field to play their second All-Star game of the season. The first one was played in Washington in early July.

There are 21 Hall of Famers in the game on this Monday afternoon (yes, that’s right, a Monday afternoon All Star Game). The American League has White Sox shortstop Luis Aparicio in the starting lineup, and Brooks Robinson, Yogi Berra, Al Kaline, and Mickey Mantle on the bench. Their other two hall of famers are in the bullpen; Jim Bunning and Hoyt Wilhelm.

The National League might be fielding one of the best lineups ever assembled. Roberto Clemente, Willie Mays, Orlando Cepeda, and Bill Mazeroski are in the starting lineup, Ernie Banks, Eddie Mathews, Hank Aaron, Richie Ashburn, Billy Williams, Stan Musial, and Frank Robinson are on the bench, and Bob Gibson, Juan Marichal and Warren Spahn are in the bullpen.

LA Angels outfielder Leon Wagner is the MVP after hitting a two-run homer against Phillies pitcher Art Mahaffey. But he isn’t the only one that belts a round-tripper. Red Sox infielder Pete Runnels and Cleveland outfielder Rocky Calavito both hit one too. Rocky’s is a three run bomb (in the 7th). He drives in four for the game. Dodger John Roseboro also hit a homer for the National League.

The final score was 9-4. The save is recorded by Baltimore Orioles (and future Cubs) pitcher Milt Pappas.

July 30: In 1943 one ball is hit for two home runs in a row. Phil Cavaretta hits a homer off the foul pole. The ball bounces back into the field of play and is used again. On the next pitch Bill Nicholson hits the same ball out of the park again…In 1962, the All-Star game is played at Wrigley Field. (see above for full story)

July 31: In 1974, Bill Bonham strikes out four batters in an inning against the Expos. It doesn’t help much. The Cubs still lose 7-4. Cub killer Mike Jorgenson gets five RBI.

August 1: In 1939, Bill Nicholson makes his Cubs debut at Wrigley, and hits a home run to beat the Phillies (see below for full story)… In 1984, the Cubs beat the Phillies 5-4 to take over first place… In 1987, Andre Dawson hits 3 Hrs to beat the Phillies… In 2011, Paul McCartney fills Wrigley to capacity and wows the audience with a nearly three hour concert.

August 2: In 1953, Randy Jackson hits a homer in the bottom of the 11th inning to win the game against the Pittsburgh Pirates. Turk Lown gets the win after pitching more than four innings in relief…In 1969, Ken Holtzman throws a 2-hitter against the Padres for the first place Cubs. They have a six game lead over the Mets.

August 3: In 2003, Matt Clement throws a four-hitter and Sammy Sosa hits a late two run homer to propel the Cubs to a 2-1 victory over the Diamondbacks. The Cubs are still 3 ½ games behind the first place Astros.

August 5: In 1971, Juan Pizarro pitches his best game as a Cub, a one-hit shutout of the San Diego Padres. An Ollie Brown single in the fourth inning is the only hit. Billy Williams knocks in the winning run. 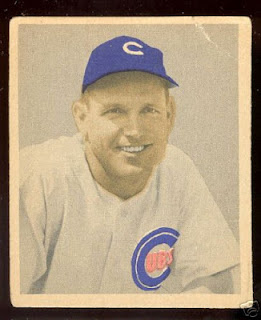 August 1, 1939
The Cubs unveil a new right-fielder to the Wrigley faithful. His name is Bill Nicholson, and he will become one of the most feared sluggers in the National League over the next few years.

In the fifth inning of his first Wrigley Field game, he steps to the plate against Phillies starting pitcher Kirby Higbe (who had been a Cub just a few months earlier), and cracks the ball over the fence. The Cubs win the game 6-2.

Nicholson will go on to hit another 200 homers over the next decade, make four all-star teams, lead the league in homers and RBI twice, and finish just one vote behind Marty Marion for the 1944 Most Valuable Player award.