This Week in Wrigley History (April 30–May 6) 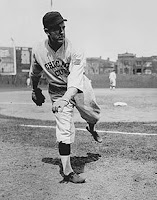 May 2, 1917.
Only one pitcher in Major League history has lost a no-hitter to another pitcher throwing a no-hitter. Of course, that player was a Cub: Hippo Vaughn. Only 3500 fans were in the stands at Weeghman Park (now known as Wrigley Field). Fred Toney was pitching for the Reds. Vaughn was the ace of the Cubs staff–a real workhorse. He was on his way to winning twenty games for the third time in the past four years, and would win 19 or more every year until 1921.

Vaughn was feeling particularly good, but he had no idea he was even pitching a no-hitter until someone brought it up in the dugout during the 8th inning. A teammate pointed out that “We haven’t even got a hit off of Toney,” and another teammate countered with “And they ain’t got a hit off Vaughn neither.” Mentioning a no-hitter in the dugout was a big no-no (and remains so to this day), but it didn’t affect Vaughn or Toney. If either man was flustered, it didn’t show in the 9th inning. Both men retired the side in order, and the game went to the 10th.

With one out in the tenth inning, Larry Kopf got a single, ending the no-hitter for Vaughn. The next batter hit an easy fly ball to Cubs right fielder Cy Williams, who dropped it, putting runners on second and third. That brought up Jim Thorpe, the Olympian. He hit a swinging bunt, but because Thorpe was so fast, Vaughn tossed the ball to the catcher to get the guy at home plate instead of throwing it to first. Cubs catcher Art Wilson wasn’t expecting the throw and the ball bounced harmlessly off his chest protector, allowing Kopf to score the only run of the game. It was the first run the Reds had scored in 34 innings.

In the bottom of the tenth, Toney had no trouble getting the Cubs. They went down in order. But Cubs pitcher Hippo Vaughn also went down in history as the only pitcher to lose a no-hitter to another pitcher pitching a no-hitter.

April 30: In 1933, Charlie Root wins a game thanks to the hitting help of newly acquired outfielder Babe Herman. He hit his first homer for the Cubs in the 7-5 win. In 1949, Andy Pafko allowed the Cardinals to win thanks to the “Inside the Glove Homer”.

May 1: They say that if you don’t like the weather in Chicago stick around for five minutes and it will change. In 1940 that isn’t true. The Cubs have a game scheduled against the Boston Braves and it has to be postponed. Because of snow. On May 1st.

May 2: In 1956 the Cubs and Giants slug it out for seventeen innings. It’s a back and forth see-saw struggle for the first nine innings, and then nothing happens over the next seven. In the top of the 17th, Alvin Dark reaches third base after getting a double and going to third on a wild pitch. Cubs pitcher Jim Brosnan intentionally walks both Willie Mays and pinch hitter Dusty Rhodes to face light-hitting second baseman Daryl Spencer. Spencer calmly lofts a sacrifice fly to left field and the Giants scored the winning run…. In 1988, Mark Grace makes his Cubs debut… In 2002, Sammy Sosa hits his 4th homer in two days, to lead the Cubs to victory.

May 3: In 1930, one of the biggest years for hitters in MLB history, Charlie Root pitches a ten inning 1-0 shutout against the Phillies. He also scores the winning run in the bottom of the tenth. ..In 1974 Rick Monday hits a walk-off homer in the bottom of the ninth against Don Gullet to beat the Reds 6-5.

May 4: In 1974, Billy Williams hits a homer in the bottom of the 11th against the Reds to win the game 3-2. Rick Reuschel earns the win, pitching in relief. The Reds got twelve hits (two from Rose, three from Morgan, two from Perez), but couldn’t push across any runs after the fourth inning.

May 5: In 1950 the Cubs have to make a substitution for a very strange reason. Hank Edwards swallowed his chew, got incredibly sick, and had to be removed from the game because he vomiting profusely. He had already hit a triple and homer against Dodgers starting pitcher Ralph Branca, so it was a big loss. The Cubs come back for a dramatic 7-6 win without him. Hank Sauer hits a two-out, two-strike three run homer in the bottom of the ninth to tie it, and Randy Jackson hits a homer in the tenth to win it… In 2001, the Cubs crush the Dodgers 20-1.

May 6: Billy Herman was not known for his power stroke. He hit only 47 round-trippers in more than 7700 at bats. But in the bottom of the eleventh he lined up Phillies pitcher Lloyd Brown perfectly to win the game for the Cubs with a walk-off home run. 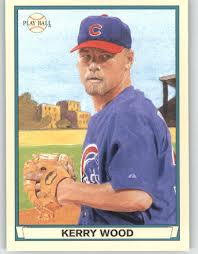