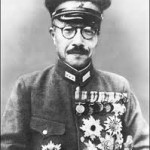 *Hideki Tojo (photo), Japanese Prime Minister during most of WW II, attempts suicide rather than face war crimes tribunal. The attempt fails, and he is later hanged.

*Vice Adm. John Sidney McCain, 61, commander of the famous navy task force No. 38, dies of a heart attack in his home. (His grandson later runs for President)

*United States 8th army headquarters announce that Iva Toguri, Los Angeles-born radio announcer who won fame among American troops in the Pacific as ‘Tokyo Rose,’ is under detention. Her family lives in Chicago. 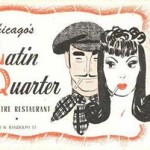 *PRICE CHECK: A Martini is 55 cents, and a beer will set you back about 30 cents a bottle.

*The league leading Cubs, who did not suffer their fourth 1945 shutout until a week ago, succumbed to their second blanking in successive days at the hands of the New York Giants in Wrigley field. An explosion in the ninth gave the Giants the three runs. Paul Derringer (photo) was on the mound for the Cubs.

*Joe Kuhel hits an inside-the-park home run. It’s the only home run hit by a Senator all season at Washington’s Griffith Stadium.

*“The Spanish Main” starring Paul Henreid (who starred in Casablanca) and Maureen O’Hara as a female pirate premieres. 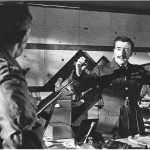 *Peter Sellers (photo) celebrates his 23rd birthday while serving in the Royal Air Force in Burma and India. He performs skits for fellow soldiers.

*In war ravaged Germany, a little boy named Franz Beckenbauer is born. He will become one of the greatest soccer players of all time.

Cub of the week: REGGIE OTERO
The Cuban born first baseman is a rookie for the Cubs, but he is no spring chicken. When he makes his major league debut this week, he’s just a few days shy of his 30th birthday. Otero spells Phil Cavarretta for a few games in September, but that’s the extent of his major league career. The following spring he’ll end up back in the minor leagues. He may not have had much time in the bigs, but he did end up with a .391 average in his 23 at bats. Not a bad lifetime average.