*President Harry Truman announces the successful bombing of Hiroshima with the atomic bomb, while returning from the Potsdam Conference aboard the U.S. Navy heavy cruiser USS Augusta (CA-31) in the middle of the Atlantic Ocean.

*The New Yorks Times editorializes: “The bomb that dropped on Hiroshima was doubtless heard by human ears for hundreds of miles around, but morally it was heard around the world. Its implications for good or evil are so tremendous in so many directions that it will take months before our minds can really begin to envisage them. With the horrible prospect of utter annihilation opened by the atomic bomb, it is hard to imagine how the people of any nation on earth can possibly want another war. But can mankind grow up quickly enough to win the race between civilzation and disaster?”

*AFN (Armed Forces Network) Berlin goes on air with the Rhapsody in Blue from George Gershwin.

*The United Nations Charter is ratified by the United States Senate, and this nation becomes the third one to join the new international organization, the Soviet Union declares war on Japan. 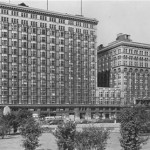 *The Chicago Tribune reports the re-opening of The Congress Hotel. “GHOSTS GONE AS CONGRESS HOTEL OPENS – Flavor of Great Past Has Vanished: The Congress hotel, once a famous gathering place of statesmen and opera stars, opened again yesterday after three years. The army occupied it from July 30, 1942, to June 30, 1943. A thoro job of modernization has converted it into an up to date hotel.” (Photo: Congress Hotel 1945)

*Clara Peller is working as a manicurist at a local Chicago beauty salon—a divorced mother of two. (She’ll do the Where’s the Beef commercial in 1984.)

*The Cubs beat the Reds in a double header 11-5 and 9-1. Phil Cavarretta has six hits—a homer, four doubles and a single, and drives in 8 runs and scores 5.

*The first-place Cubs also win a double header against the Braves at Boston. They are starting to believe this is the year.

*Golfer Byron Nelson records most tournament wins (18) in a season.

Cub of the week: BILL SCHUSTER

Schuster is a backup shortstop for the 1945 Cubs: a slick-fielding chatterbox. He was also one of the smallest players on the Cubs, a mere 5’9, 165 pounds. Schuster is one of the older players on the team at 33, but he has spent most of his career in the minor leagues, and isn’t a big force. He’ll play in 25 games, and get 56 at bats, but he will get a chance to play in the 1945 World Series. Schuster will get one at bat in the final inning of Game 5, and make the last out of the game. He’ll also pinch run in the last inning of Game 6, and score the winning run.