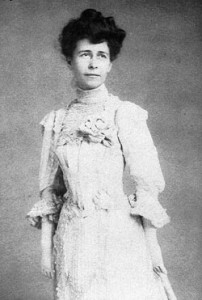 The first modern day Mother’s Day in America was celebrated this week in 1908. The first attempt to make Mother’s Day a holiday had come in 1870, when social activist Julia Ward Howe tried to create a holiday to unite women against war. She was inspired by Ann Jarvis, a young homemaker who worked for both sides during the Civil War to improve sanitary conditions. The political angle of Howe’s attempt turned some people off, and it didn’t catch on. But in an odd twist, Ann Jarvis also inspired the woman who eventually did succeed in creating the holiday…her daughter Anna (photo).

When Jarvis died in 1907, Anna took up the Mother’s Day cause as a way of honoring her mother. Instead of waiting for official recognition like Howe had done, Anna Jarvis simply declared it Mother’s Day on May 10, 1908 in Grafton, West Virginia. She held the first celebration in the church where her mother had taught Sunday School. From there, the custom caught on quickly. Some states declared it an official holiday as soon as 1912. Just six years after her impromptu Mother’s Day in West Virginia, President Woodrow Wilson declared Mother’s Day a national holiday.

Within a decade after that first official Mother’s Day, however, Anna Jarvis became a big opponent of the holiday because she was turned off by it’s commercialization. She probably would have changed her mind if she knew about the cool shirts that were available in the Just One Bad Century Souvenir Stand–perfect gifts for any mother who happens to be a Cubs fan. 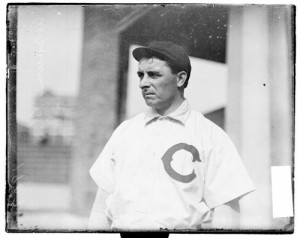 *Baseball fields are in pretty rough condition. Detroit’s Bennett Park is built over a former haymarket, and players can trip over the cobblestones just beneath the thin layer of grass. In Boston’s park (Huntington Avenue Grounds), a toolshed is in fair territory.

*Future Cub Billy Jurges, who will be shot by a stalker in 1932, is born in the Bronx.

The first “wireless radio broadcasting” patent is issued (May 11). It will be another sixteen years before the Cubs allow their games to be broadcast on the radio.

*Fred Astaire turns 9 (May 10) in Omaha, Nebraska. He and his older sister Adele are already being prepped for a song and dance career in Vaudeville by their parents. “Astaire” is their stage name (Photo: Fred and Adele). Their real last name is “Austerlitz.”

*Salvador Domingo Felipe Jacinto Dalí i Domènech turns 4 (May 11) in Catalonia Spain. His father, a lawyer and notary, hopes his son will follow in his footsteps. He chooses a slightly different path. Known as Salvador Dali, he becomes one of the greatest surrealist painters of all time.

*Harry Truman turns 24 (May 8). He is working at his grandparent’s farm in Grandview, Missouri, after spending a few years of his young adulthood working as a timekeeper for the Sante Fe railroad.

*Florence Nightengale is still alive and living in England. She turns 88 (May 12). She is known throughout the world as “The Lady with the Lamp” who nursed the British soldiers during the Crimean War in the 1850s.

Price Check: Surprise Mom for Mother’s Day with her very own “Five Drawer Drop Head Oak Cabinet Sewing Machine.” You can find them on sale for as little as $7.99.

If you travel back in time, don’t bother looking for a nice pyrex dish. Pyrex won’t be invented until 1915.