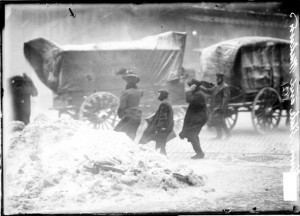 This week in 1908, Chicago is hit with the worst one day snowstorm in it’s history on February 18th. Eleven and a half inches of snow fall in less than 24 hours, bringing the entire city to a standstill. Neither the horse-drawn carriages nor the horseless carriages can make it through the snowy streets. However, future mayor Michael Bilandic is not blamed for the city’s inept response to this snowstorm…mainly because he won’t be born for another fifteen years. (Photo: From the Daily News collection at the Chicago Historical Society. View from Madison Street)

The snowstorm temporarily stops renovation work being done to the Chicago Cubs ballpark, West Side Grounds. The owner of the Cubs, Charles Murphy, has been promising renovations for several years. The city is skeptical that he will live up to his promise. Murphy’s cheapness will eventually destroy Chicago’s greatest baseball dynasty. Over the next few years, he will fire the man who built the dynasty, Frank Chance (while Chance is in the hospital recovering from brain surgery), fire his replacement, the equally legendary Johnny Evers (who goes on to win a pennant for the Braves), and run off stars like Johnny Kling and Orval Overall in salary disputes. In 1916, the rest of the National League owners conspire to force Murphy out of the league.

~The book “A Room with A View” is released to great acclaim in England (Feb 24). Eighty years later it will become a movie that bores every human male.

At the Movies: DW Griffith’s “A Calamitous Elopement” from 1908

Price Check: 100 pictures from the Siege of Port Arthur from the Japanese-Russian War, with a triple catalogue headline (“Colored Stereoscopic Views! The Most Thrilling and Realistic Pictures Ever Made! War Is Awful!”) is available now for eighty five cents from Sears, Roebuck and Company.

If you travel back in time, don’t look for Time magazine at the newsstand. The first issue won’t come out until 1923.