Historical Events (September 18–September 24): Where were the Cubs?

Easy Eddie O’Hare was a lawyer. He moved to Chicago in 1927, and soon found himself working for Al Capone. He made a fortune as a lawyer in the Capone empire, and became one of Scarface’s confidants. He was there when Capone eagerly greeted Charles Lindbergh upon the aviator’s arrival in Chicago, but he was also there when Capone cooked the books.

That knowledge would put away Capone, and would end Easy Eddie’s life. He began co-operating with law enforcement, providing them with crucial information used during Capone’s trial. He led them to the Capone bookkeeper who became a key witness at the 1931 trial, and he also helped break the code with which Capone’s bookkeepers kept ledgers at various gambling houses throughout the 1920s.

O’Hare lived a few more years after Capone was convicted, but Frank Nitti (Capone’s successor) eventually was successful in gunning him down. Two shotgun wielding killers shot him in his car on his way home from Sportsman’s Park in 1939.

So what does this have to do with O’Hare Airport?

The airport is named after Easy Eddie’s son, Lieutenant Edward “Butch” O’Hare. Butch was a navy flyer in World War II who gave his life when he was just 29 years old. The younger O’Hare won the Congressional Medal of Honor for his heroism in 1942.

When the war ended Chicago was already one of the busiest aviation harbors in America. While most air traffic went through Midway airport (at the time, the busiest airport in the country), it quickly became clear that there wouldn’t be enough room to expand.

The Chicago City Council bought suburban Orchard Field from the US government together with another 7,000 acres next door. That was in 1946. Three years later $2.4 million was spent on acquiring more land and Orchard Field was re-named O’Hare in honor of that young war hero.

On the date O’Hare was named, the last place Cubs were being shutout in Brooklyn (5-0), to fall 35 ½ games behind the St. Louis Cardinals. The Dodgers eventually won the NL that year, winning the right to get beat by the Yankees in the World Series. 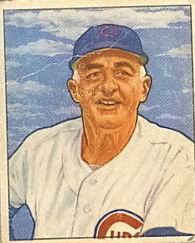 1949 is also the year that longtime manager Charlie Grimm couldn’t take the losing anymore. He begged owner Phillip Wrigley to reassign him, which Wrigley did. Grimm was replaced by Hall of Famer Frankie Frisch (photo).

It was the beginning of the end for the Cubs. They wouldn’t reclaim their former glory for another twenty years.
O’Hare Airport, on the other hand, became the busiest airport in the world during those twenty years of losing.

September 18, 1975. Newspaper heiress Patty Hearst is captured in San Francisco 19 months and several bank robberies after being kidnapped by the Symbionese Liberation Army. Dave Kingman hits a walk off homer in the bottom of the ninth to beat his future team the Cubs 7-5 at Shea Stadium.

September 19, 1995. The Washington Post publishes the Unabomber’s Manifesto. He is still on the lam. The Cubs beat the Astros 7-6 in Houston thanks to homers from Ozzie Timmons and Scott Servais.

September 20, 1881. Chester Arthur is sworn in as president after President Garfield dies. He becomes the third different president of 1881 (Hayes, Garfield, and Arthur). The Cubs (then known as the White Stockings) are in first place, and preparing to play against the Providence Grays in Rhode Island the following day. They have already clinched the championship because they have an eight game lead with only seven games to play.

September 21, 1938. A category three hurricane hits Long Island and southern New England, destroying coastal towns, and killing 600 people. The Cubs escape the New York area the day before the storm, arriving in Philadelphia. The weather is bad there too, so they schedule a double-header for the following day. The Cubs are 3 ½ games behind the Pirates with only fourteen games to play in the season.

September 22, 1927. The Jack Dempsey-Gene Tunney fight in Soldier Field in Chicago is controversial because Dempsey doesn’t return to a neutral corner for five seconds after knocking down Tunney. Tunney gets up at the nine count, and defeats Dempsey. Several Cubs players are in attendance. They had already beaten the Phillies 8-4 earlier in the day to earn Charlie Root’s 26th win of the season. Hack Wilson homered for the Cubs. (Full story below)

September 23, 1952. Richard Nixon makes his famous “Checkers speech”, so named because he was defending keeping a campaign gift, his beloved family dog Checkers. He is running for Vice President. The Cubs are on their way to St. Louis for the final series of the season. It’s meaningless for both teams. The Cardinals are 8 ½ games behind the first place Dodgers and the Cubs are 20 ½ games out of first.

September 24, 1969. The Chicago Seven trial begins in Chicago. The Cubs beat the Expos 6-3 at Wrigley Field for Bill Hands’ 19th win of the season, but it’s already too late. The Mets are on fire and have blown by the Cubs and now lead them by six games.

Jack Dempsey (photo) loved publicity, attention, and the spotlight. Gene Tunney was a teetotaler, known for his gentlemanly demeanor.

In the lead up to the fight Dempsey was drawing 8000 fans a day for his sparring sessions. 5000 fan letters a day arrived for him, including one from his pal Babe Ruth. Dempsey sent a note to his acquaintance Al Capone begging him not to do anything that would embarrass Dempsey.

Al Capone was a big Dempsey fan. He held a $3000 banquet for friends and “colleagues” that night. He bet heavily on Dempsey and the rumor around Soldier Field that night was that the fix was in. Capone had “talked to” the ref and told him that he had bet $50,000 on Dempsey, but he didn’t want that to affect his refereeing. All he wanted was “an even break for Jack.”

That ref was replaced at the last second by the Illinois Boxing Commission.

The date was September 22, 1927. The crowd was star-studded. Even the Chicago Cubs went to the highly hyped boxing match as a team after defeating the Phillies 8-4 at Wrigley Field earlier in the day. The win was Charlie Root’s 26th of the season, and no Cubs pitcher has won more games in a season since. Only 4000 people were at Wrigley to see it, but more than 100,000 were at Soldier Field for the fight. (The Cubs were winding down a good, but not great season. They finished 17 games over .500, but in fourth place, 8 ½ games behind the Pirates.)

The Dempsey-Tunney fight turned out to be one of the most controversial fights in history. 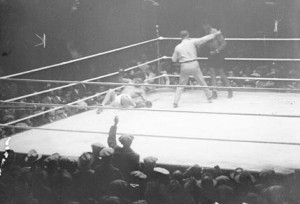 Dempsey knocked down Tunney a minute into the seventh round. As Tunney was down, Dempsey stood there despite being ordered to go back into a neutral corner (which was the rule). The ref waited for him to do that, and despite the fact that the time keeper was already at “5” on his countdown, referee Dave Barry started at one. Tunney got up at 9. He had been down for at least a 14 count, and some ringside writers had timed it at 17.

Tunney recovered to win the fight.