Cubs Opening Day at Wrigley makes clear: The Show must go on

Series Preview and Predictions: Cubs vs. Royals at Wrigley Field

Historical Events (October 23–October 31): Where were the Cubs? 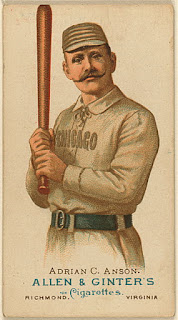 October 23, 1886
The Cubs finished up the World Series. The 1886 National League team from Chicago was known as the White Stockings–it would be another fifteen years before the Cubs name emerged. But they were a powerhouse team; the defending champions.

Led by their first baseman/manager Cap Anson (photo), and their colorful utility man King Kelly (who played every day, but all over the field–every position except pitcher), Chicago was one of the biggest draws in the league. Anson led the league in runs batted in, Kelly led the league in batting average, on-base percentage and runs, and lead off man George Gore was walked more often than any other player.

Chicago was a wide open town in 1886; not to mention the epicenter of the increasingly violent labor movement. On May 4, the Haymarket Riot took place, which took the lives of eleven Chicagoans including seven police officers.

But while Chicago was a violent, scary, and decadent city, it had also fallen in love with it’s baseball team.

When they played Detroit with first place at stake, 12,000+ fans came out to see the game (a HUGE crowd in those days). Both teams arrived in spectacular fashion–with a police and fire escort in their horse-drawn carriages. Chicago won the game and moved into first place.

The White Stockings sure loved the spotlight, and they may have loved the nightlife even more. King Kelly in particular was a notorious drunk, and he liked to drag his teammates into the gutter with him. Chicago had one of the most notorious red-light districts in the world at the time (it was the Las Vegas of the 19th century), and that certainly didn’t help. One night on the town, a backup outfielder named Billy Sunday could take the debauchery no more, and found the Lord. It got so bad that Chicago owner Albert Spalding hired detectives to follow the players around and began fining them for their drinking. Seven different players were fined $25 each.

But despite their partying ways, Chicago was still the best team in baseball. The regular season came down to the final day. When Chicago beat Boston 12-3, they won the pennant.

They did play in the World Series against the St. Louis Browns after the regular season, but the World Series was really just an exhibition in those days. Nevertheless, it was a high stakes exhibition. It was winner-take-all with the winner getting $14,000.

Because of their powerful offense, and the fact that they had two 30 game winners (John Clarkson and Jim McCormick) and another rookie ace (Jocko Flynn–who won 23–including 14 in a row), Chicago was the clear favorite. They were probably spending their money before the series even began.

In true Cubs fashion, they choked when it counted. With Future Hall of Famer John Clarkson on the mound, and future Hall of Famer King Kelly behind the plate, the winning run was scored by the Browns in Game 6…when a player stole home.

The White Stockings got exactly zero dollars for their effort.

October 23, 1974. The Reverend Al Green is in the hospital recovering from burns after his girlfriend threw a pan of scalding grits at him and committed suicide. The Cubs trade Billy Williams to the Oakland A’s for Manny Trillo, Darold Knowles, and Bob Locker.

October 25, 1973. The Arab-Israeli conflict is under cease-fire as leaders work on an agreement to formally end the war. The Cubs trade Fergie Jenkins to the Texas Rangers for Bill Madlock and Vic Harris.

October 26, 1977. Meatloaf’s album “Bat out of Hell” is brand new and climbing up the charts. Cubs fan favorite Jose Cardenal is in Philadelphia reporting to his new team, the Phillies, after being traded the day before by the Cubs.

October 27, 1924. The newspapers are abuzz with the story of the dirigible LZ 126, which has just made the longest non-stop airship flight in history, 5060 miles from Germany to New Jersey. The Cubs trade Vic Aldridge, George Grantham and Al Niehaus to the Pittsburgh Pirates for Charlie Grimm, Rabbit Maranville, and Wilber Cooper.

October 29, 2003. A solar flare causes a geomagnetic storm producing an intense display of Northern Lights. After contributing to the 2003 team that came within five outs of the World Series, Mark Grudzielanek and Tony Womack are permitted to leave the club via free agency.

October 31, 1977. ELO releases their album “Out of the Blue” with the hit songs “Turn to Stone” and “Mr. Blue Sky”. The Cubs trade Bill Bohham to the Reds for Bill Caudill and Woody Fryman.

This resort (as they called houses of ill repute at the time) was the most famous in Chicago, and Chicago was known as the most wide-open vice-filled city in America. People came from all over the world to visit the Everleigh Club.

The 11-year run of the Everleigh Sisters just happens to coincide with the best era in Chicago Cubs history.
The Cubs were still known as the Orphans in 1900 when the Club opened, although they featured a couple of young catchers who would be key members of the championship teams of ’07 and ’08, Frank Chance (who would later take over the team and move to first) and Johnny Kling. They also featured a pitcher named Brakeman Jack Taylor and another pitcher who would become a Hall of Famer (and owner of the Washington Senators), Clark Griffith.

At that time, the Cubs (or Orphans) played their games at West Side Grounds (now occupied by the University of Illinois at Chicago). It was only a short street car ride from the ballpark to the Levee (Chicago’s notorious red light district), and many fans enjoying partaking in both.

While the Cubs were building their dynasty, there were a couple of well-publicized notorious events at the Everleigh Club. 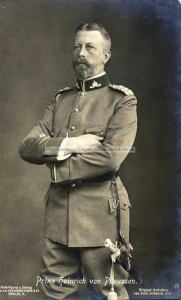 *On March 3, 1902, Kaiser Wilhelm’s brother visited Chicago to pick up a ship for the Kaiser. The very pro-German high society of Chicago sponsored numerous events for Prince Heinrich, but there was really only one place he wanted to go–and he was to give a full report to the Kaiser when he returned–the Everleigh Club. The sisters threw a huge party for the prince, featuring dancing, dining, and a very bizarre recreation of the dismemberment of Zeus’ son. During one of the dances, a prostitute’s slipper came off and spilled champagne. A member of the prince’s entourage poured the champagne into the shoe and drank it, and a tradition was born. While the Prussians were drinking out of shoes in Chicago, the Cubs were in spring training–about to begin their first season officially known as the Cubs. A few more key members of the championship team were now in place. Joe Tinker was the shortstop, Jimmy Slagle was in left field, Johnny Evers was on the bench, and Carl “The Human Icicle” Lundgren was in the starting rotation.

*On November 22, 1905, Marshall Field Jr., the son of the department store king, died of a gunshot wound. Although the newspapers reported he was shot at home (which still stands on Prairie Avenue), and that it was an accident, the young Field was a frequent visitor to the Everleigh Club, and there is evidence that he was there the night of the shooting. Whether it was true or not, the entire city of Chicago believed the rumor. The winter after Marshall Field Jr. died a notorious death, the Cubs acquired the final pieces of the puzzle, and went on their championship run (1906-1910). That following 1906 season the Cubs would have the best record in the history of baseball. Led by great pitching (Mordecai Brown, Ed Reulbach, Jack Pfiester and Orval Overall), and maybe the best-fielding infield in history (Tinkers, Evers, Chance, and the under-appreciated 3B Harry Steinfeldt), the Cubs won the National League. The same team won the World Series in 1907 and 1908, and went to the series again in 1910.

The Everleigh Club flourished during the Cubs greatest era, and it came to a close just as the Cubs winning era ended. The Mayor shut them down for good on October 25, 1911, because they published a brochure, which he considered too blatant. The Cubs played their last game that season only two weeks before the Everleigh Club closed—and although they finished just 3 games behind the Giants (in second place), they wouldn’t again sniff the World Series for another seven years, and by then, every single member of that Championship club would be gone.