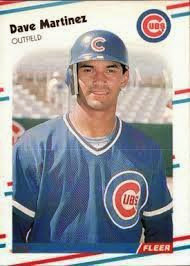 ~Dave Martinez 1964– (Cubs 1986-1988, 2000)
Martinez came up through the Cubs system and debuted in the big leagues with the Cubs. At the time, he was only 21 years old. In 1987 he won the starting center field job. He hit .292 with 16 stolen bases. Why did the Cubs trade the youngster the following season for the much older Mitch Webster? There have been unsubstantiated rumors for years about this, but no one has ever confirmed or denied anything. Is it possible the Cubs traded a young outfielder with a very bright future for one who was near the end of his career for baseball reasons? Of course it is. The Cubs have done that countless times. Regardless of the reason, the Cubs clearly got the short end of that deal. Martinez went on to have a very good career. He played sixteen seasons in the big leagues with the Expos, Reds, Giants, White Sox, Blue Jays, Rays, Rangers, Braves, and the Cubs. Martinez won a ring with the Cubs in 2016, when he served as the right-hand man/bench coach for Joe Maddon. After the 2017 season he was hired to manage the Washington Nationals. (Photo: 1988 Fleer Baseball Card)

~Steve Buechele 1961– (Cubs 1992-1995)
Steve was supposed to be the elusive player who would finally solidify the third base position — which had remained a trouble spot since the departure of Ron Santo twenty years earlier. He didn’t exactly replace Santo in the hearts and minds of Cubs fans, but he did perform respectably. In 1993, he slugged fifteen homers, and followed that up with 14 during the strike year of 1994. It was pretty obvious, however, that he was slowing down. After the strike was resolved the following season, the Cubs released him. Buechele finished his career where he began — with the Texas Rangers. Steve Buechele trivia: his college roommate was John Elway.

~Al Lary 1928–2001 (Cubs 1954, 1962)
Lary was a pitcher in the Cubs system for twelve seasons and won over 100 games in the minor leagues, but he only had two very brief cups of coffee with the big league club. The first came in 1954. He made his big league debut as a pinch runner in a blowout loss to the Milwaukee Braves, running for the incredibly slow Hank Sauer. He later made one start as a pitcher, in the second-to-last game of the season (against the Reds), but didn’t get a decision in the Cubs win. Lary didn’t return to the mound in the big leagues until 8 years later. In 1962 he was brought up and made 15 appearances as a 33-year-old, mostly out of the bullpen. He didn’t fare well. His ERA was over seven.

~Clarence Maddern 1921–1986 (Cubs 1946-1949)
Maddern was an outfielder in the Cubs system before the war, but didn’t make it up to the big leagues until after the war. He hit with power in the minor leagues, but in his only real chance at a big league job (1948), he managed only 4 homers in over 200 plate appearances. Those weren’t the kind of numbers the Cubs were looking for out of their corner outfielders. Clarence played in the minor leagues until 1957.