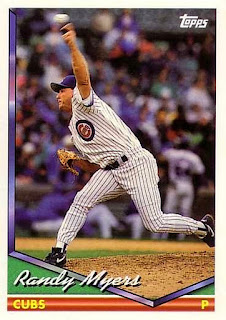 ~Randy Myers 1962– (Cubs 1993-1995)
Randy had a very good stretch with the Cubs in the 90s. He set the Cubs save record with 53 saves in 1993, and was an All-Star in both 1994 and 1995. Despite Randy’s 100+ save career in Chicago, he’s probably best remembered for two incidents. The first one was the day the Cubs staged Randy Myers Day. 10,000 Randy Myers posters were handed out to the fans as they arrived, and nearly all 10,000 of them came raining onto the field after Randy blew the save that day. The other incident happened during one of Randy’s rare bad stretches. A fan came running onto the field to “fight” Randy for blowing a save. Randy clocked him with one punch. (That fan later sold the “It can happen” signs in 2008.) (Photo: Topps 1994 Baseball Card)

~Scott Baker 1981– (Cubs 2013)
Baker was a former 15-game winner coming off arm surgery when the Cubs signed him. He rehabbed for an entire year on the Cubs’ dime and came back at the end of the year for three appearances. The Cubs wanted to re-sign him, but Baker opted to go to Texas instead. In 2014 he pitched mainly out of the bullpen for Texas.

~Phil Stephenson 1960– (Cubs 1989)
Phil played his college ball at Wichita State and set a hitting streak record (47 games) that was later broken by Robin Ventura. Stephenson came up with the Cubs as a 28-year-old rookie in 1989, but the left-handed first baseman/outfielder didn’t get a lot of playing time before being sent to San Diego as the player to be named later in the Darrin Jackson/Calvin Schiraldi for Marvell Wynne/Luis Salazar trade. He got a lot more playing time with the Padres in 1990, but didn’t respond well, hitting only .209 for the season. Phil later became a college coach in Kansas.

~Buddy Schultz 1950– (Cubs 1975-1976)
Buddy set a college record. He struck out 26 batters in a game for Miami of Ohio. That’s about as good as it gets. Schultz was a left-handed reliever for the Cubs for parts of two seasons, but didn’t have a tremendous amount of success. His ERA in his Cubs years was over six (although he did get two saves). After the Cubs traded him to the Cardinals, he blossomed and had a few very good seasons with St. Louis.