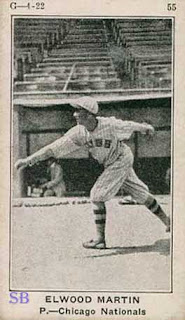 ~Speed Martin 1893–1983 (Cubs 1918-1922)
His real name was Elwood, but they called him Speed because he could get the ball up to the plate in a hurry. He was a member of the pennant-winning 1918 Cubs team, but only appeared in nine games for them that year, and didn’t appear in the World Series. Speed became a bigger part of the team the next few years (winning 11 games in 1921), but he also started getting hit pretty hard. By 1922, his time in the big leagues was done. Speed ended his career with a losing record (29-42) and a high ERA for that era (3.78), but with one of the coolest nicknames in Cubs history. (Photo: 1922 Strip Baseball Card)

~Duke Simpson 1927– (Cubs 1953)
His real name was Tom Simpson, and he was a multi-sport star at Notre Dame (and in the army after he was drafted in ’45). This is what Who’s Who Magazine wrote about Simpson after his rookie season for the Cubs in 1953: “Right-handed — throws a slider and a hard-curveball. A highly-rated rookie, he came on in relief in 29 games in ’53, was 1-2 W/L in 45 innings, striking out 21 batters, walked 25 but had a disappointing 8.00 ERA.” You read that last part right. His ERA was eight. The Cubs had purchased his contract before the 1953 season after he had pitched a no-hitter in the minor leagues. “The Cubs, with their typical luck, got themselves a sore-armed pitcher,” Simpson later said. He never made it back to the majors.

~Jason Hardtke 1971– (Cubs 1998)
Hardtke got a cup of coffee with the Cubs during their playoff season of 1998. He played a little third base and outfield during his brief stay, and hit .238. Before coming to the Cubs, he got a similarly brief shot with the Mets. Most of his career was spent in the minors. He also played one season in Japan.

~Vance Page 1905–1951 (Cubs 1938-1941)
Page’s Cubs career lasted exactly four seasons to the date. He debuted on August 6, 1938 (as a 32-year-old, after 13 minor league seasons) and made his final appearance on August 6, 1941. Page pitched in Game 4 of the 1938 World Series and gave up two runs and two hits, although there is no shame in giving up hits to Lou Gehrig and Joe DiMaggio. Vance’s first two years he was mainly a spot starter, and his final two seasons he worked predominantly out of the bullpen. The late bloomer didn’t have much time to appreciate his post playing days. Just ten years after his last pitch, he fell off a barn and died of the injuries he sustained in the fall. He was only 45.

~Charley Smith 1937–1994 (Cubs 1969)
No relation to the Charlie Smith who played for the Cubs 50 years earlier, this Charley was a third baseman/shortstop who played in two games during the 1969 season. He was 0 for 2 in two pinch-hitting appearances in April. Charley had a pretty good big league career in the 60s. He had stints with the White Sox, Dodgers, Phillies, Mets, Cardinals, and Yankees before finishing his career with those two at-bats with the Cubs. The highlight of his career probably came in 1966, when the Cardinals traded him to the Yankees straight up for Roger Maris.

~Freddie Burdette 1936–2010 (Cubs 1962-1964)
Burdette was a right-handed reliever who pitched for the Cubs in the early 60s. He wasn’t exactly known for his command. In his 34.1 big league innings, he walked twice as many men (20) as he struck out (10). His only career win was saved by the man the Cubs acquired for Lou Brock…Ernie Broglio.

~Bob Lennon 1928–2004 Cubs 1957)
Lennon once hit 64 homers in a season in the minor leagues, but he only hit one in the big leagues, and it came for the Cubs against his favorite boyhood team, the Brooklyn Dodgers. Lennon was injured frequently (arm, ankle), and never really got a chance at a regular big league job. Unfortunately, he couldn’t adjust to the pinch-hitting role, and hit only .165. He later played in Venezuela and Puerto Rico. His nickname was Archie.

~Jim Davis 1924–1995 (Cubs 1954-1956)
The lefty started and relieved for the Cubs, posting four complete games, nine saves, and 23 wins over three seasons. Davis was a junkballer, who threw everything from a screwball to a knuckler. In his last season with the team, he struck out four batters in one inning, making him one of only a handful of players to ever accomplish that feat. The Cubs traded him to the Cardinals after the 1956 season along with Hobie Landrith, Sam Toothpick Jones, and Eddie Miksus. This Jim Davis is no relation to the Jim Davis who draws the Garfield comic strip.