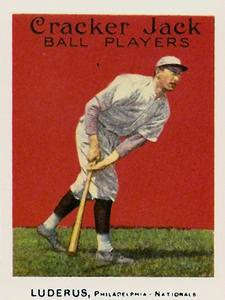 ~Fred Luderus 1885–1961 (Cubs 1909-1910)
Luderus was a rugged German-American first baseman who backed up Hall of Famer Frank Chance during his first two seasons in the big leagues. He only hit one homer for the Cubs, and it was an inside-the-park shot against the team he played for the rest of his career, the Philadelphia Phillies. Chance traded Luderus to the Phillies in the middle of the 1910 season because catcher Jimmy Archer could handle first base too. Unfortunately for the Cubs, Fred became a big run producer for Philadelphia, finishing in the top ten in homers in eight of the ten seasons in that decade. In 1915, he became the first Phillies player to hit a homer in the World Series. Luderus started at first base for Philadelphia until 1920. The player the Cubs got in return for him (pitcher Bill Foxen) was out of baseball by 1911.

~Clayton Richard 1983– (Cubs 2015-2016)
The former White Sox wunderkind arrived from the Pirates during the summer of 2015. At first it was thought he could fill the fifth starter role, but he eventually emerged as an important left-hander out of the Cubs bullpen. He was a part of the postseason roster in 2015, and pitched in six postseason games without allowing a run. The Cubs re-signed him after the playoffs, but 2016 was not a good year for Clayton. He suffered an injury, struggled when he returned, and was released by the Cubs in August. He finished the 2016 season with the Padres. The Cubs finished that season by breaking a 108-year championship drought.

~Carmen Pignatiello 1982– (Cubs 2007-2008)
The left-handed reliever got two very brief cups of coffee with the Cubs, at the end of 2007 and the beginning of 2008. He appeared in only six games, and had an ERA of 6.75. Carmen was a local boy (Providence High School in New Lenox) who pitched in the minors for ten seasons. He hung up his spikes for good when the Twins released him from their Triple-A team early in 2009.

~George Freese 1926–2014 (Cubs 1961)
Bud, as he was called by his teammates, was 34 years old when he got his ever-so-brief shot in a Cubs uniform. He been in the minor leagues for most of his career, but did get brief tastes of the big-time with the Tigers in 1953 and the Pirates in 1955. His seven at-bat stint with the Cubs wasn’t the end of the line for Bud either. He played another three seasons in the minors, before finally retiring in 1964 at the age of 37. The third baseman hit 198 career homers. Only three of those came in the big leagues. He coached for the Cubs after his playing career ended.

~Bubba Church 1924–2001 (Cubs 1953-1955)
Church was a Southern boy through and through — born in Birmingham, attended school at LSU and Mississippi State — so it was only natural that his teammates called him Bubba. Bubba burst onto the scene with a 15-win season for the Phillies in 1951, but he never came close to repeating that performance. He was hit in the face with a batted ball (off the bat of Ted Kluszewski), had some arm problems, and struggled the rest of his career. As a Cub, he was knocked around pretty hard. In just over 120 innings over three seasons, the right-handed swingman gave up 25 home runs.

~Ralph Hamner 1916–2001 (Cubs 1947-1949)
Hamner came up to the big leagues after the war, but because of the interruption in his playing time, he was already 29 years old. They called him Bruz. He had flashes of brilliance, pitching seven complete games, but in 220 career innings, Bruz allowed an astounding 368 baserunners.

~John Dolan 1867–1948 (Colts 1895)
Dolan started exactly two games for the Cubs (then known as the Colts) in September of 1895. He lost one and had a no-decision in his other outing. That was the end of his big league career. He previously pitched for Cincinnati, Columbus, Washington, and St. Louis.